From the RuneScape Wiki, the wiki for all things RuneScape
Jump to: navigation, search
The Old School RuneScape Wiki also has an article on: osrsw:The Other Inn.

The Other Inn is on the pirate island of Mos Le'Harmless. It is run by an NPC, Mama, who will sell a variety alcoholic drinks. She will sell Braindeath 'rum', although only after Cabin Fever has been completed.

Players can buy a variety of alcoholic drinks there. The Other Inn's name derives from the other inn on Mos Le'Harmless called Harpoon Joe's House of 'Rum'. The other inn is the southern of the two pubs, and is slightly larger than the House of 'Rum'. 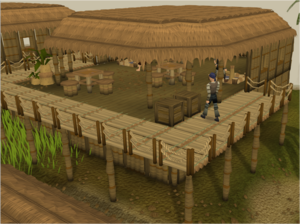 The upper floor of the Other Inn.

Also found in the inn is Bill Teach. Bill returns to the inn during Cabin Fever, and can be spoken to here in relation to the later quests Rocking Out and A Clockwork Syringe.

The band Bard Roberts and the Stanky Penguins, consisting of Bard Roberts, Stanky Morgan and Flippers McGraw, can be found performing in the inn. This acts as a Resting point to restore run energy, similar to a standard Musician, as well as a place recount previous pirate related quests that the player has completed. Bard Roberts takes the player into a cut scene set on a ship and sings while your character performs various tasks included in the given quests.

During Ritual of the Mahjarrat, the inn is the location for meeting Sir Tendeth. Sir Tendeth is a Temple Knight undercover as a pirate in order to gain information about a possible attack on Mos Le'Harmless. The town is ultimately attacked when speaking to Sir Tendeth in the inn, and Sir Tendeth later dies investigating the matter.

The upper floor consists of a terrace on one side with a boardwalk connecting to the upper floor of Harpoon Joe's House of 'Rum'. A number of Pirates can be found here.

Both The Other Inn and Harpoon Joe's House of 'Rum' share the same stock.