From the RuneScape Wiki, the wiki for all things RuneScape
(Redirected from The Nodon Front)
Jump to: navigation, search 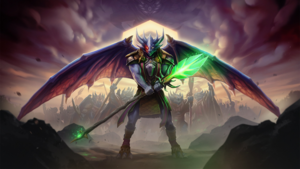 Promotional art featuring Kerapac with the Staff of Armadyl leading the Nodon, with Jas looming in the distance.

The Nodon Front is the first of four fronts of the Elder God Wars Dungeon released on 26 July 2021. The front has no requirements to access; however, 92 Slayer is required to fight enemies in this part of the dungeon, and 90 Construction is required to turn the siege weapons against the enemy. It is also recommended to have at least level 80 in combat skills, as well as tier-80 equipment. Additionally, the completion of Sliske's Endgame, Desperate Measures and City of Senntisten, as well as their prerequisites, is recommended for a better understanding of the story, as the front is considered the next instalment in the ongoing Elder God Wars narrative. The Shard of Erebus and pontifex observation or pontifex shadow ring are useful in the dungeon.[1][2][3]

The Nodon Front features the first assault on the cathedral in Senntisten, where united forces of young gods keep the eggs of the Elder Gods from hatching and destroying Gielinor in the process. The attack is led by Kerapac, the bound and his army of Nodon dragonkin, who have been enslaved by Jas and tasked with reclaiming the eggs. Kerapac is also the avatar of the the Needle, an Elder artefact which gives him control over time, and possesses the Staff of Armadyl.[2][3]

For the duration of the first week after release, Death provides free item reclaims and ring of death doesn't lose charge upon dying.[2] 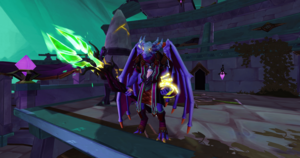 Kerapac, the bound is a boss encounter within the Grand Colosseum of Senntisten. Kerapac can be fought in a team 1-3 players, with an emphasis on a solo fight. His health and drop rate does not scale with team size. The fight has both a normal and hard mode. The hard mode has four phases, as opposed to three in normal mode, and provides a harder fight but also has access to the normal unique drop table along with fragments for the Staff of Armadyl, a tier 95 two-handed magic weapon. Kerapac uses both Elder artefacts during the fight, bringing himself back with the all previous mechanics after each phase.[2][3] Unlike in the previous God Wars dungeons, there is no kill count requirement to fight the boss.[4]

Players with 92 Slayer can fight several variants of the Nodon dragonkin using different combat styles: Guards (Melee), Hunters (Ranged), Artificers (Magic) and the more challenging Engineering variant. They will also be able to fight siege weapons, which can also be turned against the Dragonkin with 90 Construction. Additionally the five generals from God Wars Dungeon will aid in the defences of the Catheral, providing the player with temporary bonuses.

The following abilities can be activated using the Extra Action button:

The release month of the first front of the Elder God Wars Dungeon was first revealed by Mod Warden during the RuneScape Mobile release stream on 16 June 2021, along with the information that next fronts will open in the following months.[5] On 9 July a newspost revealed first details about the first front, including requirements and the date of the reveal trailer.[1] On the same day a short teaser featuring Kerapac's voice and a view of Senntisten colosseum was posted on social media.[6] On 16 July 2021, following a countdown, a reveal trailer was published, revealing the update's name and release date, as well as a narrative introduction.[7] On the same day, an accompanying newspost was published, informing that more details as well as gameplay will be revealed in a Developer Diary on 20 July, as well as announcing behind the scenes Discord lore chat with Mod Jack and Mod Raven on 21 July, an update to the newspost with new information on 22 July, and launch stream with developers on the release day.[2] The introduction video released on 20 July provided first look at gameplay and details regarding the boss fight, Slayer and siege weapons activities and rewards.[3]

The Nodon Front has been developed by Mod Ramen and Mod Luma.[8] The artists working on this project were Mod Blkwitch, Mod Wing, Mod Soffan, Mod Alex and Mod Haku.[9]