From the RuneScape Wiki, the wiki for all things RuneScape
Jump to navigation Jump to search
"Nexus" redirects here. For the Jagex employee, see Mod Nexus. 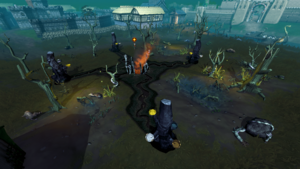 The Nexus, introduced on 13 May 2013, is low-level team content, set near the Zanaris shed in Lumbridge Swamp, in which the player can help a druidess named Ysondria to ward off an emerging Grotesque. It is primarily designed for lower level players, but may be played by any level. It is intended to be a social Prayer training method.

The Nexus consists of a hole in the ground, from which a creature's arms are reaching out. Surrounding the Nexus are four pillars, each of which has four differently coloured bowls on.

According to Ysondria, this creature is responsible for causing corruption to the surrounding area, with the Nexus allowing the creature's corruption out onto the surface. Ysondria wishes to use the pillars to purify the corruption and feed this purified corruption back to the creature, so that the creature may be destroyed. This task was given to her by her mentor Augrum, who died shortly after setting up the pillars. There is a Draynor beginner task to be completed by talking to Ysondria.

The main objective is to make the Grotesque appear, so that it may be banished. However, to do this players must first correctly channel the nearby streams. 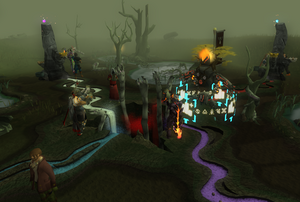 Players participating in the Nexus.

To begin, players must first obtain a charmed sack from Ysondria. The charmed sack should be used to collect some of the corruption of the Grotesque from the centre of the Nexus. The sack will store up to a maximum of 15 charges of corruption at first, up to 25 over time.

The collected corruption should then be purified on one of the four different bowls located on the each of the four pillars of purification. Doing so will create a coloured stream flowing from the pillar into the Nexus. The stream will be coloured according to which bowl the most corruption has been purified in. For example, purifying corruption in the Chaos bowl at a given pillar may produce a Red stream if corruption had previously been purified in the Battle bowl at that pillar.

If players can maintain all four differently coloured streams simultaneously for long enough, the streams will all turn orange and then disappear. After the streams have all turned orange, a small sparking ball will appear near the top of each pillar (initially there will be none). The direction of the ball of light corresponds to one of the coloured streams - this will be on the same side of the pillar as the stream that was most recently created on the previous cycle. The ball of light signifies that a stream of that type cannot be produced at that pillar. When you try to channel the bowl that corresponds to the same side as the of ball of light you get the message "This pillar is currently resistant to order/battle/chaos/fealty. You need to channel a different aspect." appears. This means the same bowl can't be used 2 cycles in a row at one pillar.

After successfully turning the streams orange 5 times, on the next round, again if all four colours are held long enough, the Grotesque will rise from the centre. You can banish it using the Prayer skill - Click the Grotesque to banish it once it appears. Doing so will award the player with Grotesque bones, which give up to 1294 Prayer experience when buried (scaling with your prayer level). The Grotesque only appears for a few seconds, so be quick to banish it when it appears. The whole process may then be repeated. Note: This process requires more than one player, and preferably several, in order to get all four streams running simultaneously. 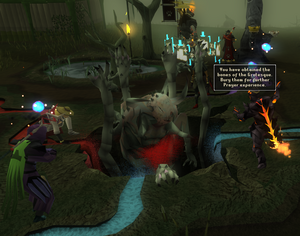 Solo players cannot summon the Grotesque, as they cannot maintain all 4 streams by themselves. Thus, one can gain the fastest XP by focusing on only one bowl and using tick manipulation. Clicking once again quickly after each XP drop reduces both gathering and purifying corruption to a 2-tick action, dramatically improving experience rates.

The pillars and their bowls are rotated around the centre, all facing inward, making the North bowl different for each side. Because of this rotation a good tactic to get four different colour streams is to use the bowl on the same side on every pillar. For example: Use the north bowl to purify on each pillar. When the north bowl is blocked on the next round, use the south bowl on all pillars. and in the third round go back to the north bowls.

It's possible to summon the Grotesque with only two players by having each player alternate between two pillars. For example, Player 1 may run between the fealty bowl on the northern pillar and the chaos bowl on the western pillar while Player 2 runs between the order bowl and battle bowl on the eastern and southern pillars.

Players will gain Prayer experience for various actions, the majority being gained by burying the Grotesque bones received. The amount of experience gained for each action depends on your Prayer level. Once a total of 50,339 Prayer experience (enough for level 1 Prayer to 43) has been gained, you will no longer be able to interact with the Nexus.

The amount of experience gained from burying bones depends on when you collect the bones, not when you bury them. Because of this, it's more efficient to bury the bones you get as soon as you get them, yielding more experience from collecting and purifying the corruption from having a higher level earlier.

A clan avatar may be used to increase the amount of experience. However, the Grotesque bones cannot be used on an altar in a player-owned house or with the Ectofuntus.