From the RuneScape Wiki, the wiki for all things RuneScape
Jump to navigation Jump to search
For the achievement, see The Needle Skips (achievement).

The Needle Skips is a quest featuring the story of a local family and The Needle, one of the elder artefacts. It is one of few quests that are fully voice-acted, and has a mystery theme that takes after previous quests like One Piercing Note. The Needle Skips is very narrative-driven, and players must find and enter clues to unlock the full story.

Mod Osborne and Mod Krista, prior to her departure from Jagex, began working on the quest as part of the 2017 Game Jam.

The location of the Needle.

Begin the quest by searching the needle, located west of Piscatoris Fishing Colony; follow the southern path (coloured in grey on the map) to the west, over a small bridge, then north, then turn east just before the large house, and walk over the stone pathway.

Upon searching the needle short dialogue and cutscene occurs, showing the nearby buildings while the player wonders what has happened. After the cutscene the player will receive a shard of the needle and a mysterious body will appear laying on the ground beside the needle.

A search of the body will reveal that the body appears to be frozen in time, with a message saying "Megan" written in blood near it. Communing with the shard will allow the player to search for keywords from the story. By entering "Megan" (the message found near the body) the player will unlock a fragment of a memory that is viewable through the shard.

Continue searching the quest area for additional keywords, and enter them into the shard to unlock more fragments of memories and add characters and objects to the quest area. Throughout the quest, scenery such as fireplaces, bookcases and bushes will have to be interacted with.

A temporal portal will appear next to the Needle once chapters are completed. Use the portal to progress to the next chapter. Note that it is not necessary for the player to unlock all fragments of memories to progress.

It should be noted that one can enter all of the keywords for a chapter, play through the story, and then interact with the necessary scenery to progress the quest. The interactions and the memory fragment unlocks don't need to be done in any particular order to complete the quest.

There is some leniency for some of the keywords. For instance, during the first chapter, entering "30" works to unlock the keyword "30th".

Chapter 1 is told from Megan's perspective.

If you are interested in the story, type in the first word of each fragment of a memory, for it to play in order. Be careful as some words are repeated so typing in one word will play two fragments, most likely out of order. Read through all the fragments and choose words that only appear in the fragment you are trying to play.

If you're not interested in the story, you can skip to the end of this section by entering the word "fire" or "fireplace" into your needle shard and interacting with the fireplace. Enter the portal next to the Needle to progress to next chapter.

Below are all keywords needed to fill up Megan's section of the shard.

Below are all words categorised into the memory fragments as seen on the shard.

Chapter 2 is told from Primrose's perspective. If you're not interested in the story, you can skip to the end of this section by entering the word "birthday". Go to the portal next to the Needle to progress to next chapter.

If you are interested in the story type in the bold words first.

Below are all keywords needed to fill up Primrose's section of the shard.

Below are all words categorised into the memory fragments as seen on the shard. The keyword "metum" for the subchapter "A demon's name" will only be recognised after "birthday" is entered for the last subchapter. Even then, the memory won't be shown, and instead there will be a message "The Needle glows, recognising the name. But now is not the time to utter it."

Chapter 3 is told from Gail's perspective. If you're not interested in the story, you can skip to the end of this section by entering the word "wenla". Go to the Needle and investigate it to finish the chapter.

If you are interested in the story type in the bold words first.

Below are all keywords needed to fill up Gail's section of the shard.

Below are all words categorised into the memory fragments as seen on the shard. The keyword "metum" for the subchapter "A demon's name" won't show a memory fragment, and instead there will be a message "The Needle glows, recognising the name. But now is not the time to utter it." 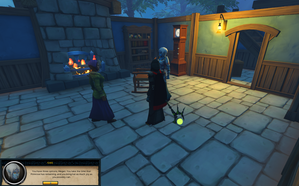 Go back to the Needle and continue to the finale. This time, you will end up in the present. You will need to find a cure for Gail, Primrose, and Megan. As Gail mentioned previously, the leaves and berries of the buckthorn bush can be used to cure illness.

Run down the path from the house, and pick from the buckthorn bush by the river. Grind the leaves and crush the berries. Go inside the house and search the bookcase northeast of Megan. Talk to Megan who is possessed by the demon. She can only be freed by saying the demon's correct name, "Metum". You must have searched the bookcase to get the correct name as an option.

Head upstairs and use the buckthorn smelling salts on Primrose, who is lying unconscious on the floor.

Use the crushed buckthorn berries, now called bottle of crushed berries, on the stove or fireplace in the house to create a buckthorn salve. Use this healing salve on Gail, who is still up on the hill next to the Needle. She will recover and go down to Megan to talk to her.

After the dialogue that follows, continue to the Needle, pick up the note, read it, and go back to the house. Talk to Megan to finish the quest. 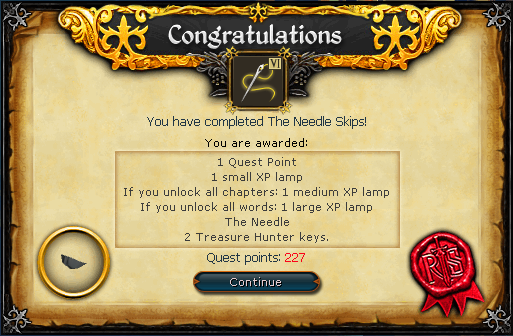 The Needle Skips is directly required for the following quests/miniquests: