The Mermaids and the Dragon

From the RuneScape Wiki, the wiki for all things RuneScape
(Redirected from The Mermaids and the Dragon)
Jump to navigation Jump to search
This article is official lore, copyrighted by Jagex.
This text is copied verbatim from the RuneScape website; the original text may be found here or from a different Jagex source. 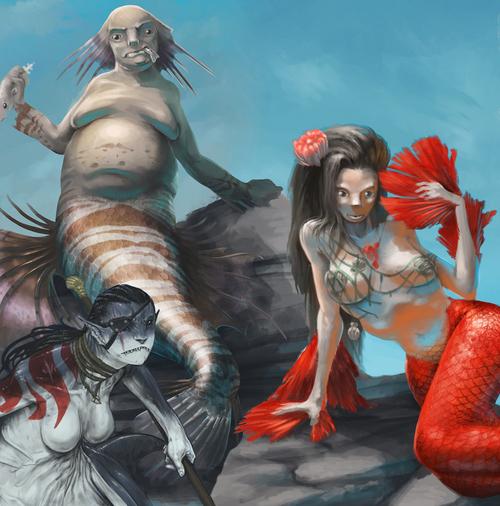 When the summer currents came, the monkfish and baron sharks came with it. The weeds and fronds were busy with shrimp and the anemones blushed with colour.

For the five mermaids of the Blue Spiral, the currents brought the hunting season. Tridents were sharpened, teeth were filed to points, and music thrummed in the practice halls. Here, the mermaids danced in circles to clear the grogginess of hibernation. They traded partners in the spinning dance, talking about the coming hunt.

"Remora is twenty. Should we bring her this season?"
"She has no magic. We'd have to watch her constantly."
"Still no magic? When'd you get yours, Urchin?"
"Fif’een."
" Honestly, there's no helping Remora. She’s only good for cleaning and cooking."
"Stop talking about me as if I were elsewhere!"
"Agreed. We leave her."

The first day of the hunt arrived. Four of the five mermaids woke and locked the door of the house behind them. Several pots - baked in with seaweed - cluttered the kitchen, a washing brush balanced deliberately on top of them.

The older mermaids hunted in the ocean basin, wrapping their catches in kelp. They snacked on guppies and chased morays from hidey holes, stealing their homes for an overnight stay. When morning came, they would tally catches and use their water magic to send food parcels home.

On the thirtieth day, the summer currents shifted. The migrating shoals continued their journey southward, and the mermaids begrudgingly turned tail. They shared stories on the way back and marvelled at the season’s haul.

On coming to the Blue Spiral, their home, they saw that the door was open. It swayed in the currents, buckled at its middle. The blade of a swordfish was discarded nearby.

They opened their gills and let the ocean into them. A gentle tug, Remora’s scent, pulled them southwards, and they followed.

Days of swimming brought them to land, where they surfaced. They nervously pulled themselves up and looked about. There was no clamour or screaming, so they sat on a jetty’s side and focussed their magic. Their scales and fins shifted into legs that had not been used for years.

Awkwardly at first, and then with more confidence, they walked. While they kept to the shadows and forests at first, they soon found that they were safe: in hammocks, beds and hay bales, everyone was asleep. The people they passed were dreaming and mumbling about beauties, adoration and hidden passions. They were the sleeping smitten. The mermaids dismissed the behaviour. Humans were a strange people, and they never cared to understand them.

Brazenly now, the mermaids followed the scent to the coast, and then to a cove. Here, the sea crashed and frothed, and the mermaids eyed a cave that been scooped out by the water. Footholds dotted the cliff face on the way down.

Once inside, the cave wended narrowly before opening up again. A vast cavern greeted them; darkness above and about them as they walked onto a platform. They could each sense a threat through the panicked flapping of their gills.

In answer, the cavern shook. A mechanism glowed green, bathing everything in an eeriness that did nothing to ease the mermaids.

Then came a roar. It bellowed like thunder, jumping their hearts and stumbling their legs. Magnificent golden eyes rose and blinked above them, growing until they came into the green light. There, they were surrounded by dragon head, mouth as big as a whale.

Before the mermaids could test their legs with a sprint or jump, the dragon spoke:

"This story starts under the sea, in the home of my sisters. In that home, I found moments to sing. But I knew, if my sisters heard me, they would roll up some kelp and force it into my mouth."

The mermaids held hands. They were sure that Remora, their stepsister, had become a dragon. They believed that her magic had come to her late, but it had delivered powers beyond anything they had seen before. But, as quickly as the disbelief came, it was flooded by jealousy.

Air became thin in the room. Warmth buffeted the mermaids, and the dragon’s nostrils glowed. The mermaids jumped backward, sensing fire, but time stopped instead. Not in a metaphorical sense, but literal: the mermaids hung in the air, half off the platform and motionless. They should have fallen, but magic suspended them there, as the dragon’s head lifted and formed a fireball in its throat.

They channeled their magic. The water below rippled and then burst upward, forming a globe about them: a giant dew drop. Remora’s dragon flames lapped around it, and the drop bubbled and boiled. The mermaids shrieked in pain as their scales blistered.

Time juddered before letting them go. They fell, encased and boiling, into the cool water below.

A day later, three mermaids swam back to the Blue Spiral. The eldest sister was dead, boiled by the dragon and wrapped in kelp by the sisters. The corpse arrived before them on the magic currents. As the mermaids sat in their kitchen, dirty pots about them, they talked.

"So we are three."
"Remora..."
"Don’t say her name!"
"Why did she get that power? We should all be dragons."
"Why should we be the weak ones?"
"We deserve the power more than her."
"We should grab it for ourselves."
"We bury Manta, we recover, then we search."

That day, they resolved to become dragons themselves. They made an oath, and decided not to rest until they were more powerful than Remora. It had not occurred to them that Remora was not the dragon, but was instead inside the dragon.

In truth, they had little idea of where to search. So, they searched for other dragons, wyrms and great creatures of the sea, to find out if they too had once been mermaids, and to learn their secret. They dared not return to Remora. They knew where she remained, and they knew she held the secret to becoming a dragon. But, as before, and for very different reasons, they treated her as if she wasn’t there.

And, each day they woke, looked in their hand mirrors, and wished deeply that they were the next ones; that they would be the ones to grow tall, spread their wings, and lay waste to everything about them.