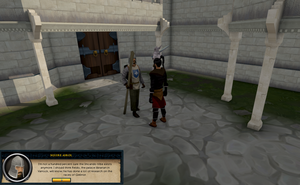 The start point of the quest

In the courtyard of the Falador Castle, you can find Squire Asrol, who tells you that he has lost the sword that belonged to his master, Sir Vyvin. When you suggest that you could make another one, the squire informs you that the sword was Sir Vyvin's inheritance and it was specially made by the Imcando dwarves long ago.

He wants you to help him by tracking down the Imcando dwarves and convincing them to forge a new sword. Before parting, the squire suggests you talk to Reldo, Varrock's librarian, for more information on the dwarves.

Go to the northern section of the Varrock Castle, into the city library, to find Reldo. After some chat, Reldo reveals that the Imcando dwarves were tragically wiped out by various Barbarian invasions on the Ice Mountain. Although, some of them have indeed managed to escape and were last seen on the southern peninsula of Asgarnia, but they "do tend to keep to themselves". 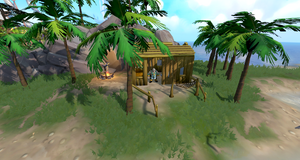 Continue onto Asgarnia and head south. An Imcando dwarf lives near the Asgarnian Ice Dungeon, south of Port Sarim.

You should see a small house on the side of a hill with an anvil logo. Look for Thurgo, the Imcando dwarf, and ask him if he would like some redberry pie, an offer he can't refuse. Talk to him again, and ask him about the sword; he says he is willing to make a new sword, but he needs a picture to make an exact copy. 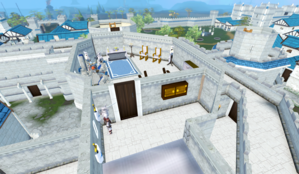 Go back to Falador and talk to the squire again. He tells you that Sir Vyvin has a portrait of his father, along with their ancestral sword, in his room. Go to the 1st floor[UK]2nd floor[US] of the castle and climb the staircase in the east part of the castle. You will wind up on 2nd floor[UK]3rd floor[US] in a room with an altar. Sir Vyvin's room is the room immediately to the south. Look for a cupboard nearby and search it. You will obtain a portrait that shows the sword.

Sir Vyvin will stop you if he catches you "borrowing" his portrait. To prevent this, just make sure that he either isn't present in the room or is standing behind the opened door while you are picking up the portrait. You can also talk to him and attempt to distract him, or simply teleport elsewhere.

Once you have the portrait, go back to Thurgo.

Talk to Thurgo and give him the portrait. He will tell you that the hilt of the sword is made up of blurite. Blurite is a rare metal which isn't known for making actual weapons, but he requires it to decorate the hilt exactly as it is. Along with the blurite, he also requires two iron bars to construct the entire sword.

You will have to enter the dungeon on the nearby hill to obtain the blurite ore. All enemies in the cave are aggressive, so bringing food and armour is a good idea. The blurite rocks (black with light blue nuggets) are in the last free-to-play chamber, covered in snow and filled with ice warriors and ice giants. The former is more of a problem as they are human-sized and rarely gets trapped by obstacles, but it is possible to mine the ore while being hit by one, even as a level 3 player with only beginner-level food (eating stops the mining process so you must click the rock again, but does not reset your progress). Since you don't need any other items in this part, you can bank everything else before hand, and die after successfully mining since you'll be able to keep the blurite ore.

With the blurite ore and iron bars, talk to Thurgo, who proceeds to make you a sword. Finally, with the look-alike, go back to Squire Asrol and present him with the sword. 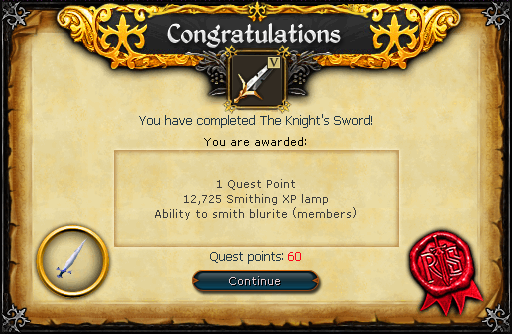 The Knight's Sword is directly required for the following quests/miniquests: