From the RuneScape Wiki, the wiki for all things RuneScape
Jump to: navigation, search
The Old School RuneScape Wiki also has an article on: osrsw:The Inadequacy
"Inadequacy" redirects here. For the related music track, see Inadequacy (music track). 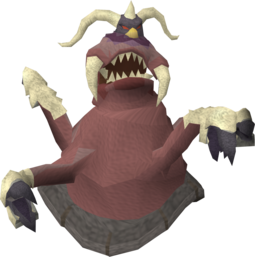 The Inadequacy is fought in the quest Dream Mentor, for the purpose of curing Cyrisus' fear of combat. After it is killed, it transforms into a level 93 The Everlasting. The Inadequacy is a very powerful monster that should not be underestimated. To kill this monster it is advised to have 75+ Attack and Strength or 70+ Magic.

The Inadequacy is fightable along with A Doubt's as a class C boss monster in the Dominion Tower minigame if the player has completed Dream Mentor.

Players cannot bank after defeating each monster in the quest; they must start over from the first monster if they leave the Dream World.

Ranging/maging players should note that they need not use the lectern safespot as The Inadequacy is immobile and its Doubts attack slowly, hit relatively low, and are inaccurate. 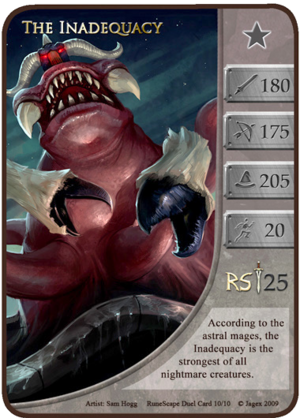 The Inadequacy depicted on a RuneScape Duel card.

As in the quest, The Inadequacy will frequently summon Doubts to attack you with melee, but these can be ignored as Protect from/Deflect melee will nullify their attacks. Simply killing The Inadequacy wins the match, and the Doubts will die along with it.

The update history project is a work-in-progress – not all updates to this topic may be covered below. See here for how to help out!
Retrieved from ‘https://runescape.wiki/w/The_Inadequacy?oldid=34329295’
Categories:
Hidden categories: