Strategies for The Great Orb Project

From the RuneScape Wiki, the wiki for all things RuneScape
< The Great Orb Project
Jump to: navigation, search

This page is aimed at players interested in the art of playing the Great Orb Project effectively. For basic information about how to start playing, see the main page.

An understanding of game mechanics is essential to develop at some point, as this will allow you to understand fundamentally how to best play the game.

Orb are NPCs which are controlled by one player at a time. Each tick you repel or attract an orb, you send an instruction to the orb to move two tiles toward you. The orb moves at the rate of one tile per tick, and the instructions do not stack, so when you stop attracting/repelling an orb, it will move 2 tiles further, unless obstructed. Moving an orb for the least amount of time possible, a tick, is called a tap, and it sends the orb two tiles.

For an orb to be scored, it has to touch the altar. There are always 3 orbs per colour in play, barring glitches (the most common being the mind altar having 4 or 5 orbs of each colour). When an orb is scored, a new orb will spawn in one of the fixed spawn areas specific to that altar. There are always 2 minutes (200 ticks) from when the first orbs spawn until the altar ends and the last orbs disappear. There are 196 playable ticks where you can attract or repel orbs.

As with all NPCs, orbs will not be drawn on the game screen if they are more than 15 tiles away from you.

Once an orb reaches the altar, there is a delay of one tick before the next orb spawns.

All of RuneScape is divided into fundamental units of time, running on a clock common for all on that server, called ticks. Every action you register within one tick will start to take place as the next tick arrives.

The first player to touch an orb of his colour controls the orb. In the case of multiple players touching the same orb simultaneously, the player with the highest priority in the player queue will take control of it (an exception is if the orb is still moving but not controlled by anyone, in which case the player with the lowest priority will in fact take control of it. This can happen if the controlling player releases the orb next to a barrier, making the orb travel around it).

As long as a player is still controlling the orb and the orb is still moving, the orb will not respond to attempts by other players on his team to attract or repel that orb. When the player releases the orb, another player may attempt to take control of it after two ticks have elapsed. If the controlling player continues to hold the orb and the orb becomes stuck, it is possible for another player to take control of the orb. The exact details of when you can control a stuck orb with the controlling player still attracting it are not completely understood.

Positioning is the most important concept in GOP. For orbs to to be scored, you must attract them from the right position. Attracting from the wrong position will cause orbs to become stuck and make no progress, losing time. Therefore, take care to position yourself before attempting to attract an orb.

In general, the best positions to stand are the four cardinal directions (north, south, east, west) adjacent to the altar. From these positions, most orbs on the opposite side are easily scored by holding them; the angle between you and the corner rocks is just right for the orbs to go around them. This is not the case for the off-centre positions.

Timing is the second most important concept in GOP. Each altar lasts only 196 ticks, and the timer is constantly counting down. Therefore, any time wasted will decrease your score. Pay attention to not hold orbs longer than necessary. This may be difficult in worlds with high delay.

There are delays between some actions, including beginning to attract an orb after having just moved to a new position, and transferring to another orb after having just tapped one. The term "prototick" has been coined for these delays, and it is useful to take these into account for timing.

There are some orbs, where it is the case that you can reach it, but not reach the square it will move to next after you attract it. These include some orbs next to pillars. Holding these orbs will cause you to drag toward the orb. In cases where this is undesirable, tapping the orb will prevent the drag. 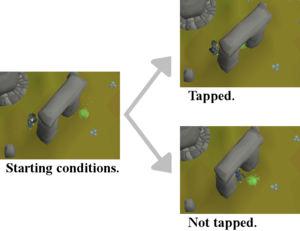 Line of sight in RuneScape (and, by extension, in GOP) used to be symmetrically rotational until the RuneTek 5 update sometime in 2009. Now they are player-symmetric. This means that whether you can see an orb does not change if your position and the orb's position are swapped. This, however, has destroyed the rotational symmetry of angles. Angles are now different depending on whether the orb is east of you or west of you. Keep this in mind as you play. You can try out different angles with an emulator.

Despite positioning being the most important concept in GOP, having to move is costly. Moving 90 degrees around the altar consumes 3 ticks of the 196 total ticks in an altar, and moving to another side in large altars consumes an upward of 20 ticks. Therefore, if you have other players in your team, it is essential to coordinate positioning with your teammate(s) to reduce the movements required.

For small altars, the following general positioning guidelines are useful:

For large altars, there is no agreed upon rule for how to position the players. However, no matter what, be sure to spread out and cover as much of the area as possible. Otherwise, some spawns will be outside of the visibility range for all players, which makes them waste time looking for the orb.

Countering opponents, commonly called defending, involves undermining your opponents’ actions. This has become unpopular in private competitive games but still remains an option. Defence is carried out by creating barriers to block the other team's orbs, and repelling (or attracting) their orbs into worse positions. On the water, fire and chaos altars, it is possible to repel an opponents orb far enough out that it will become stuck, and therefore is completely taken out of play. On the air altar it is possible to tap repel an orb into such a position behind a tree, that it is no longer reachable.