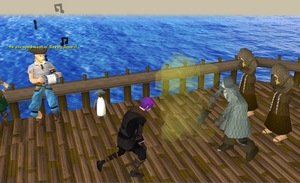 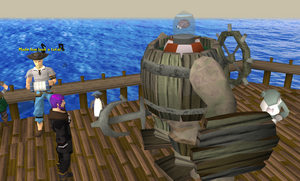 The Great Brain Robbery song can be listened to by players who've completed The Great Brain Robbery. It is performed by Bard Roberts and the Stanky Penguins. As with all of Robert's songs, it is composed of four limericks (AABBA rhyme system) that provide a synopsis of the quest along with a cutscene involving:

It also involves Pickled brain being thrown at the Zombie monks to turn them into regular Monks.

On Mos Le'Harmless by the sea,
Ye met Brother Tranquil-i-ty,[sic]
He asked a favour,
From someone braver,
For his brothers on Har-mo-ny.

Just east of the Slayer Tower,
Was a surgeon who did cower,
You made Fenk-en-strain,
Transplant the monks' brains,
For freedom from lupine glower!

Mi-Gor tried to stop your heart's pace,
Yer foe's arm: part anchor, part mace,
Struck without delay,
But him ye did slay,
Made him look a total...
...moron.