The Grand Tree, which shelters the majority of RuneScape's small gnome population, is dying.

Is it human sabotage or an inside job?

Help King Shareen to find the true cause and save the tree gnomes from an uncertain fate.

Speak to King Narnode Shareen on the ground floor[UK]1st floor[US] of the Grand Tree and ask him why he seems worried to start the quest. He will tell you that there is something wrong with the Grand Tree, which frames up the Stronghold. In confidence, he takes you below, to the foundations of the tree, where you see that the roots are deteriorating. He will tell you that the only person that could help them is Hazelmere, creator and guardian of the Grand Tree. Offer your help and Narnode gives you a bark sample together with a translation book.

Hazelmere can be found on the 1st floor[UK]2nd floor[US] of his hut; on the last small island of the bridged chain of islets east of Yanille, past some jungle spiders and up the ladder. If you can use the fairy rings, the code CLS will put you right on the isle.

Trying to speak to him, he will speak in a foreign gnome tongue. Hand him the sample, he studies it, and responds in incomprehensible speech, yet you can make out one word – "Daconia". He complies with your request to write it down for you, and hands you a message for King Narnode.

After following the translation book together with the scroll, the text reads:

Return back to King Narnode Shareen inside the Grand Tree where you started. When he asks you if you understood what Hazelmere told you, tell him that you did, although that might not be the case. The message will need to be reconstructed by choosing each translated line from the conversation (choose the 'none of the above' option of the dialogue until the correct wording appears). After giving him the message, King Narnode tenses up at the thought of the Daconia rocks.

When you ask him about the rocks, he says that they are a fail-safe method, created by Hazelmere, to destroy the Tree in case it grows out of hand. The king wants you to help the gnomes, by assisting them in finding the rocks. He also requests you to warn the chief of the three tree-guardians, Glough, of the imminent threat to the stronghold.

Climb up the ladder to the tree house located just south-east from the fence of the Grand Tree, near the gnome guards, to find Glough. Greet him while eating to inform him of the Daconia rocks theft, and he will snark back arrogantly. You mention the situation to him, and he automatically presupposes the fault of the humans, even saying they'll invade the Gnome Stronghold. Being completely untrusting towards the humans, he tells you that you should report back to the king. Apparently Glough resents the human race as such.

Return to King Narnode Shareen. Asking him for news about the situation, he will tell you that Glough has already caught the culprit – a human who was carrying three Daconia rocks, who has been detained. While you ask to see the detainee, who is on the top floor of the Grand Tree, the king hints that the tree itself is rather tall. Go up the ladder to the top floor of the tree to find Charlie imprisoned in a cage, and talk to him through the wooden bars. When you interrogate him for a motive, he will blurt out that he was only following orders, doing what Glough had paid him to do. Charlie had gone to the gnome on the hill who gave him Daconia rocks for Glough in exchange of showing the seal, and that you should search Glough's house for evidence.

Go back to Glough's house again – search the cupboard and you will find his journal. After reading the journal, you find out that Glough is blaming all of the evils of the world on humans, even denying them the possibility of a good natured spirit. When you confront Glough for being a spy, he will become outraged and will order his guards to arrest you and throw you into the jail you've just visited, putting you together with your cell-mate Charlie.

Talk to Charlie and he'll tell you that if you want to gather more information about Glough's plans, you will need to talk to the foreman at the Karamja shipyard, to which Charlie apparently had to deliver vast quantities of gold. He also gives you a keyword that seaman use – Ka-Lu-Min – so that you can work undercover in Glough's crew. 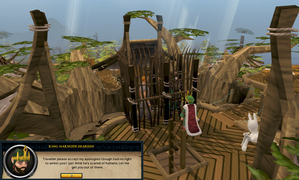 In the prison with Charlie, atop the Grand Tree.

The King will appear and apologise for Glough's actions. He will tell you to take the gnome glider, as Glough has set up guards on all other escape routes. Now go across the bridge from the cage and talk to Captain Errdo in the clearing north of Charlie and he'll fly you to Karamja. Unfortunately, for some reason the glider crash lands just west of the ship yard. Be careful at this point, as you might get attacked by Jogres at the crash site if your combat level is too low. Walk towards the shipyard and try to open the gate; you will be stopped by the worker at the passage. Tell him that Glough sent you, and give him the password (Ka-Lu-Min) that Charlie told you. If entered correctly, the worker will apologise for stopping you and let you through.

After getting inside, go to the foreman, who is towards the end of the southern docks, and either talk to him and answer his interrogation, or kill him. If you decide to kill him but have low life points, you can buy 10 bananas from the crew member nearby. If you chose to answer the foreman's questions instead, the answers can be obtained from reading Glough's journal.

Once you answer the foreman's questions, he will tell you about Glough's plan to invade the humans and then give you a lumber order. If instead you killed the foreman, he will drop the lumber order, which states Glough's plan to take over Gielinor. He plans to kill the Grand Tree and use it to create and launch 30 battleships to Port Sarim and proceed with an attack against the humans.

As the glider was broken in the crash, and the fact that Glough has put you on the no-fly list and ordered the gate guards to not let you in, you'll now need to enter the Tree Gnome Stronghold via an alternate route, or enlist the help of Femi at the main gate.

Even if you show King Narnode the lumber order from the shipyard, he will still not believe your accusations. Speak to Charlie again on the top floor of the Grand Tree. He will suggest you speak to Anita, Glough's girlfriend. Anita can be found in the second tree house to the west of the swamp, north-west of the Grand Tree. Talk to her, and she will ask you to return Glough's key for her. 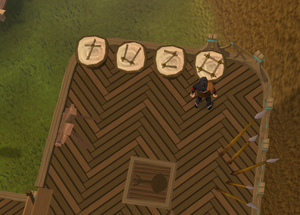 Spelling with the sticks

Go to Glough's house and use the key to open the chest. Inside, you will find some invasion plans detailing his plan to seize control over Gielinor. Take the notes to King Shareen, who still won't believe your evidence when they searched Glough's house, all they found were some sticks lashed together. Take the sticks from the king.

Before returning to Glough's house, equip yourself for battling the level 98 black demon. You can access a bank by going up the ladder next to the king, and heading south-west.

Return to Glough's house and climb up to the watchtower. You will find four small pillars. Use the sticks with the pillars to spell out TUZO which, using your translation book, means "OPEN." You will hear some gears turning, and the trap door on the platform opens. Enter, but be prepared. 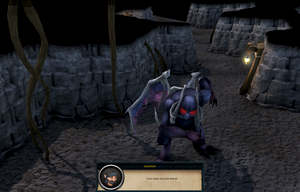 The trapdoor ladder breaks right after you start the fight, so teleportation is the only way for a quick escape.

After you enter, make sure to wait until Glough walks up to you and starts the conversation. If you move before he gets to you, you will have to exit and go back through the trap door. After you enter, and Glough talks to you, he will send a level 98 black demon to attack you.

The demon is very strong and can hit over 1000 using melee attacks, so protect from melee is recommended to ward off some damage from its attacks. Unlike black demons everywhere else in Gielinor, this demon cannot use Magic and is weak to water spells, instead of bolts. Hiding behind the rocks directly south or going down the tunnel slightly will prevent the demon from using melee attacks and allow you to defeat it without taking much damage of your own. Be advised that you'll be unable to retrieve any spent ammunition after the battle. 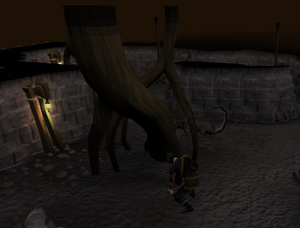 After defeating the demon, walk along the passage to the north until you find King Shareen standing by a ladder. Talk to him and tell him that Glough had sent a demon to attack you, but the king STILL does not believe you. He finally sends a guard to scout for Glough, to which the guard comes back with Glough, who was hiding amongst the stones. The king apologises and asks you to locate the last daconia rock. While the roots can be searched prior to speaking with the King, you will be unable to find the daconia rock unless you have talked to him.

Search the roots all around the area until you find the daconia rock. Though it can be time-consuming, you might need to search all of the roots. If you accidentally destroy or lose the rock, it'll spawn in the root where you first found it.

After obtaining the rock, talk to King Shareen again for your reward for saving the Grand Tree. 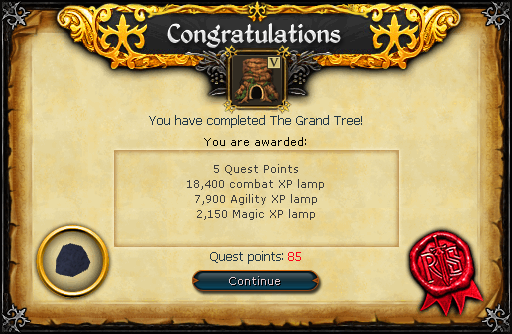 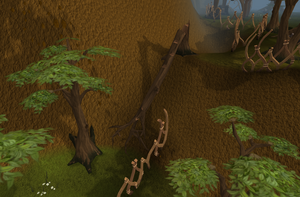 The Grand Tree is directly required for the following quests/miniquests: