Difference between revisions of "The Godless"

From the RuneScape Wiki, the wiki for all things RuneScape
Jump to: navigation, search
Browse history

This article is about the organisation. For the title, see of the Godless. 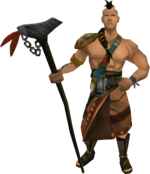 Holstein, the Emissary of the Godless faction

The Godless is an organisation founded shortly after the end of the Fifth Age by a former druid known as Biehn. Their main philosophy is that they do not want gods on Gielinor, and state their goals as a desire to defend Gielinor from the gods while protecting the innocent. While the faction's philosophy is similar to the wishes of the god of balance, Guthix, the faction is not inherently Guthixian - although some prominent members are former Guthixians. The name was an idea of co-founder Kara-Meir, who suggested it instead of Biehn's name, "The Antitheists".

Holstein, the emissary for this faction, can be found in Port Sarim.

Founding of the faction

After the news of the death of Guthix spread around the world, a druid known as Biehn was shocked to learn of the truth of Guthix's belief. Seeing how he misjudged the god, and found no reason to stay within Taverley, he left on a journey. Kara-Meir contacted Biehn after having received his letter. The two agreed to create a faction to continue Guthix's belief of a world belonging to no god. While Biehn was getting other mortals to join their cause, Kara-Meir managed to find Ux, a demon, to join the organisation. Biehn struggled with finding a name for the faction and wanted to call it "The Antitheists." Kara-Meir mocked his initial suggestion and proposed the simple name "The Godless." As the faction grew and received more supporters, a portal appeared north of Lumbridge. Kara-Meir and Ux went to Lumbridge to examine the reason for Ux's headache.

Battles of the gods

Main articles: The Battle of Lumbridge, The Bird and the Beast, and Cabbage Facepunch Bonanza

Soon after the portal grew bigger, Zamorak emerged through it and started destroying the ground around him to obtain Guthix's divine energy that was left over after his death. Saradomin arrived and interfered with Zamorak's plan and the two began to fight over the divine energy. The Godless had Kara-Meir with a few members to watch over the battle. They did not take direct action in the conflict, but had members positioned as spies in both gods' camps. Should the battle have escalated and been taken outside of the crater, they would have stepped in. After the battle was over, the Godless had hid away from sight.

After the announcement of Sliske's game, Armadyl and Bandos built their tower and started their battle on collecting divine energy to fire at the other, to where the Godless took a more direct approach to the battle in hope to cause both side to fire their tower at the same time and strength. Members of the Godless would ambush caravans belonging to the two factions in order to prevent one side or the other from gaining a stronghold on the region. At times, they would offer a temporary truce to the combatants, or offer to ambush the other side more. They also had spies within the two warring faction, intent on sabotaging the Golems. After Bandos' defeat, the Godless returned to their everyday life.

After watching the Gods' battles Brassica Prime and Marimbo decided to through in their own battle, but as a party instead of a actual fight. Kara-Meir and Holstein of The Godless soon arrived to attempt to stop this "battle between the gods", and Kara made a speech to the two gods, proclaiming that all races would soon be free of their influence. The two gods merely laughed at her, calling her names, while Brassica pelted her with cabbages and Marimbo with feces. Kara-Meir then left to get cleaned up, leaving Holstein behind in her stead to overlook and attempt to disrupt the contest, although Brassica Prime merely believed him to be a poor naked homeless person, and Marimbo kept flirting with him. The Godless failed to stand victorious over them, and came in third, close to beating Marimbo's score.

The Godless were among the factions that detected the approach of the worldeater, Tuska, to Gielinor. They joined forces with Zamorak, Armadyl, and Saradomin to stop this from happening. A barrier of Anima Mundi, similar to that of the Edicts of Guthix, protects Tuska from direct attack by the gods and Vorago, so a Scopulus was sent as Vorago's representative for the faction, to gather enough adventurers to help weaken the barrier of Anima Mundi and allow Tuska to be attacked directly.

Finally the long battle came to an end, the Godless had succeeded in causing more damage towards Tuska allowing Vorago to give the killing blow himself. After Tuska landed south of the Wizard tower, The Godless, with a Scopulus, had set up a camp on Tuska to protect the portal from the gods, as well as Gielinor from the portal itself. Kara-Meir and Garlandia can be found on Tuska's back with the Scopulus.