From the RuneScape Wiki, the wiki for all things RuneScape
Jump to navigation Jump to search
The Old School RuneScape Wiki also has an article on: osrsw:The Giant Dwarf
This article is about the quest. For other uses, see Giant Dwarf (disambiguation).

The Giant Dwarf is the first quest in the Rise of the Red Axe quest series. It involves The Red Axe leader beginning his plan.

Five hundred years have passed since the rule of King Alvis, saviour of Keldagrim and victim of his own inventions.

By the time of his death, the monarchy was all but abolished. Now the Kings in Keldagrim are but a distant memory... with only the statue of King Alvis to remind the people of the old days, the dark days.

So begins the Rise of the Red Axe, the new multi-part storyline centered[sic] around the dwarves and their capital of Keldagrim. The first quest, The Giant Dwarf, introduces the city and the powerful business Consortium that rules the dwarven realm. Discover weird goings-on, narrowly escape from falling chunks of rock, ride around in minecarts and... make sure you don't bump into the wrong person on the way to the city! 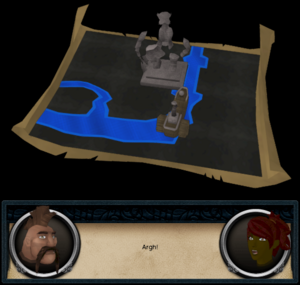 Crashing into the dwarf statue.

To start, speak to the Dwarven Boatman inside the mine east of Rellekka. To get to him enter the cave in the north side of the east of Rellekka, close to fairy ring DKS. As soon as you enter, walk east and enter the cave entrance shaped like a crack in the wall in between the two statues to go to Keldagrim. The Boatman will ask you to take a trip in a ship to Keldagrim. Say yes and that you don't care about waiting for the boat. A cutscene will introduce you to the Red Axe quest series, then the boatman will crash his boat into the giant dwarf statue. You will be arrested, and taken to Commander Veldaban.

Commander Veldaban will say that your arrest was for nothing but to talk with him, and asks you to replace the statue. Talk to Blasidar the Sculptor. He lives in the eastern side of Keldagrim, across the bridge, south of the kebab shop. He will make the statue if you can get him clothes, an axe and boots fit for a king. These three sections may be done in any order.

Talk to Vermundi who is in the south-western corner of the east marketplace (indicated by the silk symbol) and ask her about making the king's clothes. She can, but first she needs a picture of the clothes. Talk to the librarian in the house in the northeast corner of west Keldagrim and he will tell you to search the library for a book about dwarven clothes. Climb the bookcase in the north-east corner with a ladder in front of it to find the Book on costumes (Scholars Guide to Dwarven Costumes). If you're carrying 30 kg or more, you will be unable to climb it. You can deposit your items in the nearby bank to reduce your weight.

You must speak with the librarian before you are able to find the book. Take the book back to Vermundi, who needs 1 coal (there are rocks in the north-east of the city) and 1 set of logs (there are dead trees right outside the cave) to get the clothing machine running. Use them on the spinning machine and use your tinderbox on the spinning machine. Now pay her 200 coins for the exquisite clothes. Go back to the sculptor's house and give the exquisite clothes to his model.

An axe fit for a king[edit | edit source]

Talk to Santiri, who is in the sword shop all the way in the north west of west Keldagrim. He talks about how his family came to possess the Battleaxe, and then mentions that it has been damaged and that the sapphires on the hilt had either been stolen or washed away. During the dialogue where you offer to repair the axe Santiri may note your mastery of smithing but exclaims that even you aren't skilled enough.

Use three sapphires on it to rebuild the hilt. He then says that the blade itself is not up to scratch anyway, but that only an Imcando Dwarf could repair it. Santiri will then refer you to the librarian, just east of his shop, who you ask about finding an Imcando dwarf.

If you have completed The Knight's Sword[edit | edit source]

If you have completed The Knight's Sword quest, visit Santiri at sword shop within Keldagrim, and speak with him. Your character will mention that they know an Imcando dwarf and you can disregard the next part and just go find Thurgo. You can then just skip the library part of this quest, teleport to Port Sarim to go see Thurgo. Talk to him and he will ask you for an iron bar, after which he will repair the battleaxe for you. You then have the option to be transported back to Keldagrim straight away.

If you have not completed the aforementioned quest[edit | edit source]

If you have not yet reached the part where you learn about the Imcando, then go to Reldo in the Varrock Library and he will teach you about them. You must talk to the librarians in Keldagrim first about the Imcando and then to Reldo; going to Reldo or Thurgo alone will elicit no special Giant Dwarf quest dialogue.

Use a Varrock teleport/lodestone to get to Varrock, besides the cart in eastern Keldagrim. As of the Lodestone update, the quickest way to get to Port Sarim is using the Home Teleport spell and teleporting directly to Port Sarim, provided the lodestone is unlocked, and walking due south. Alternatively, if you have access to the fairy ring system, the code to Mudskipper Point is AIQ.

Go to Thurgo with an iron bar and a redberry pie, and ask him to repair the axe. He is in the house with an anvil symbol in Mudskipper Point, south-east of Rimmington and south of Port Sarim. If you give him the pie before asking if he's an Imcando, you will need another pie in your inventory to unlock the conversation tree but you do not need to give it to him.

Do not attempt the drop trick with the completed axe once Thurgo has repaired it. Thurgo will supply you with another (iron bar) repaired axe if you drop the one in your inventory, but it is ungemmed and you will need to repair it with another three sapphires. You will be unable to pick up the axe you have dropped.

When Thurgo is finished with the axe, you have the option to return immediately to Keldagrim. Once you return to Keldagrim, use the axe on the model to give it to him.

Go to the south-west anvil on the west side of Keldagrim (south of the Black Guards' Headquarters) and ask Saro about the boots. He sold them to Dromund, another dwarf in Keldagrim. Speak to Dromund in his house just north of the bank.

When finished, take the left boot from the table when he is not looking. His back has to be turned to successfully steal the boot. If you try taking the boots before talking to Dromund, a message will pop up saying, "You do not need this boot."

Go outside and around the house until you are at the window next to the right boot, and use Telekinetic Grab on the boot from the outside when Dromund is facing away from you (the regular spell book is required to do this). Give the items to Riki the sculptor's model, if you have not done so already, and talk to Blasidar again. He will tell you that the directors of the consortium cannot agree on the face for the statue, as each company wants its own director's face. He will agree to make the statue up to the neck. A cutscene will ensue, before which you will not be able to join the consortium. Your job is to get an agreement amongst the Consortium members. There are eight mining companies in the Consortium, each stationed in the upstairs of the marketplace. You need to impress and join one of them. The companies you may choose from are:

The secretary of your chosen company will ask you to get them a few random ores in groups of 2-5 within a time limit. Repeat this five times until the secretary lets you speak to the director. If you already have the ores in your metal bank, you may withdraw them from the furnace on western side of the ground floor of the palace. If not, the optimal way to do this is to obtain the task, then go to the Grand Exchange, where the ores/bars can be bought easily. Then use the trapdoor in the north-west corner to quickly travel back to Keldagrim. This method takes no more time than running to the west Keldagrim bank.

The items cannot be noted. Logging out, starting the dialogue over, or declining the task will reset your progress. Assuming you have the required mining level, you may ride the minecarts to Ice Mountain and mine the available ores yourself.

After completing five tasks, the secretary informs you that the director wishes to speak with you. Once the secretary allows you, you will now have to do one to four tasks for the director – they'll ask for bars instead of ores. Once again, by using the minecarts you can either buy the desired bars from the Grand Exchange, or mine the ores yourself from Ice Mountain and cast Superheat Item, thus removing the need to travel to a furnace (though one can be found in Keldagrim's western marketplace), or by withdrawing them from any source that is connected to the player's metal bank. 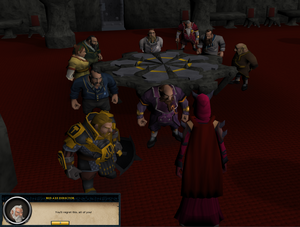 Hreidmar storms out of the Consortium meeting.

After you have done the tasks for the director, ask to join the company. Then say that Blasidar sent you and that you would support him and then when he asks, volunteer to support the director at the next Consortium meeting. You will get a message telling you to return to Commander Veldaban who will take you to the meeting (an amusing cutscene will play). Go back to the headquarters west of the Keldagrim bank, you will support the director and receive some Meeting notes as well as your reward. If you want to skip this cutscene, You can just click on the ground while in the meeting. Clicking on the ground will cause the screen to black out and you will be awarded the rewards for completing the quest. 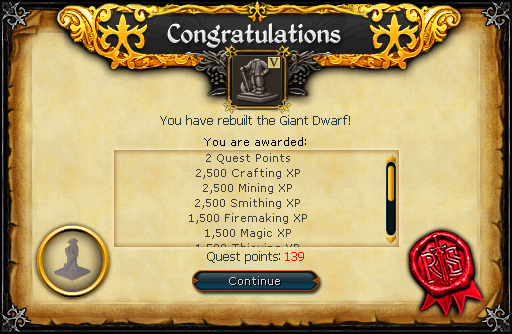 The Giant Dwarf is directly required for the following quests/miniquests: