The General's Shadow is a short miniquest that features General Khazard preparing for the Ritual of Rejuvenation by informing his scouts in the Shadow Realm. It serves as a sequel to both The Curse of Zaros and Fight Arena, and a predecessor to Ritual of the Mahjarrat. Like many other miniquests, it was released as part of a hidden update, with no announcement made regarding its release.

The Return of Khazard[edit | edit source]

Locate the ghost of General Khazard, found north of the Agility log north-west of the Sinclair Mansion. You have to find him as he cannot be seen on the minimap, and he wanders around a lot. His wander range seems to be within a triangle formed by the Rellekka house portal, the Agility shortcut to Sinclair Mansion and the Swaying tree. You can find him quickly by setting The General's Shadow as your active quest, which will plot a trail directly to him. You must be wearing all the ghostly robe pieces to start the miniquest and the ring of visibility to see him at all. He will not recognise you as the adventurer that killed him earlier, but he also will not trust you to set you on a task. To gain General Khazard's trust, go to the Seers' Village and talk to Sin Seer. She can be found upstairs in the house with the Spinning wheel. Bribe her with 40 coins, and she will give you a note as exchange for your troubles. Return to General Khazard, and talk to him again. He will want you to visit four of his scouts around the world to check up on their status.

You will now need to find the four scouts. One is in Tai Bwo Wannai, another is outside Falador, the third one is in the Kharidian Desert and the last one is outside the Gnome Stronghold. Make sure you wear the Ring of visibility to see them, the Ghostspeak amulet to talk to them (unless you have completed the hard Morytania achievements), and the ghostly robes for them to recognise you as a messenger for General Khazard. It should be noted that the Scouts will not appear as yellow dots on your minimap, so pay careful attention to your screen to avoid passing them.

The Karamjan scout is near the Tai Bwo Wannai village. Use the Karamja lodestone to get there. Go to the special tree grove with mahogany and teak trees, and search just a bit to the south-east of there. If the first location fails, then go farther south. He may be in the jungle brush that is closer to the mine, which is southeast of Tai Bwo Wannai. Speak to him, he will tell you that the villagers recently left because of some curse caused by their gods, but they came back. If Shilo Village is done, he will also comment on that.

The Gnomish scout is to the south of the Tree Gnome Stronghold. You can get there by using the Eagles' Peak lodestone or the Traveller's necklace teleport to the Outpost. He can be found anywhere from the apple orchard to Jorral's house, where the quest start point is on the world map. He will comment on Hazeel, The Plague, and Glough.

The Faladian scout is a little east of Falador, between the Falador east wall and the Draynor Manor west fence. Use the Draynor lodestone to get there. He will also not have anything useful to say, unless you have completed the quest Vampyre Slayer, in which case he will say that Count Draynor has been dispatched by an adventurer, but he will have to go inside to confirm this.

The Kharidian scout is directly south of the Shantay Pass. Go through the pass, and search the area around the rock formation just to the south of the pass. (You may want to bring waterskins to survive the desert heat. Wearing an enchanted water tiara is only useful to find the scout since you must be wearing the entire Ghostly Robes set in order to successfully communicate with the scout.) He will inform you that he followed someone called Lazim, and that Khazard may have two more players at the Ritual. He also comments on the prisoner of Jaldraocht having been freed, and that General Khazard used to live in the desert, although not by choice.

When you are talking to the last of the four scouts, be sure not to end the conversation until you receive the message that you are to relay back to General Khazard. The message is "We of the blood are still loyal. Pavlov is the messenger." 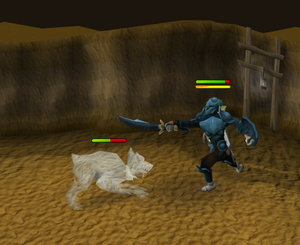 The ghost of Bouncer!

During the fight, you cannot use prayers of any sort, so be sure to bring some food.

Return to General Khazard again, who will be grateful, still not recognise you and give you a severed leg. He will redirect you to your reward, which is in a cave north of Ardougne.

You can now wear normal armour. Make your way to the Goblin Cave, right by the Fishing Guild. The cave is also used in the quests Dwarf Cannon, One Small Favour, and Land of the Goblins. Enter the cave, and head north. At the end of the passage, turn east to arrive at the northeasternmost cavern. Do whatever you need to prepare, and enter the "crack" in the south wall of the cavern. Once inside, you will encounter Bouncer's ghost, and the player will realise that Khazard has tricked them again. 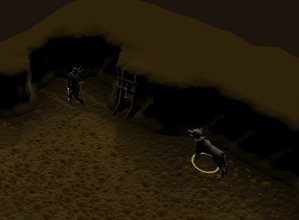 Now, you need to defeat the level 91 ghost of Bouncer (6500 life points). He is weak to air spells, so Magic is advised, although from combat level 110+ he shouldn't be too much of challenge, even without air magic. He usually hits 200's, but can easily hit into the 400's even with high defence. If you run out of food, you can exit the cave through the crack, or alternatively you can trap Bouncer by running into the south-western corner and use the regenerate ability to heal. 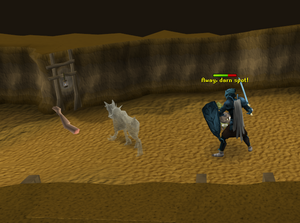 When Bouncer's health is depleted to 0, you will automatically throw the severed leg to distract him, shouting "Away, darn spot!" If you don't automatically throw the leg, move around the area so you're near the center of the room. Once he is distracted, you will deliver a killing blow by stabbing him in the back. Leaving the area and then returning will reset the fight.

Speaking to the General again after completing the miniquest will result in further dialogue. You will tell General Khazard, "Your dog attacked me. AGAIN!" General Khazard simply replies, "You expect any less of me, considering you beat me in front of my men? Bouncer was angry that you killed him, which is quite natural, really. Now get out of here, filthy human. I will waste no more of my time on you. I've more pressing concerns."

Without the amulet of ghostspeak equipped, Khazard angrily says "Wooooo whooo wooo. Whoot!", to which you laugh at and respond "You tell 'em."