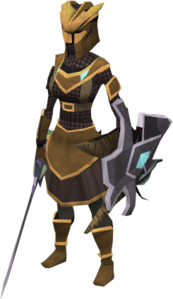 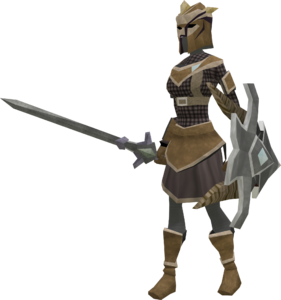 The Forgotten Warrior is the main playable character in the Vengeance Fremennik Saga.

The Forgotten Warrior was part of Bilrach's forces stationed in Daemonheim on the Forgotten floors when a group of adventurers invaded her area; Kay Thanxby, Ican Haz, Lola Wut and Lotheria Seldorina, running into her party and slaughtering them, believing that they were nothing more than monsters. Unbeknowest to them, the Forgotten Warrior had survived, but the rest of her group had been slaughtered, including her brother Taevas.

Vowing vengeance on the adventurers, she eventually tracked and killed them one by one, taking their ring of kinship to ensure that they wouldn't be revived. During this time, she was also tortured by a manifestation of Taevas who demanded to kill them all painfully, which would affect the actions she took. Prior to reaching Kay, she was riddled with a mental image of slain children. She then fought Kay and managed to defeat her, accusing her of killing children. Kay could either successfully or unsuccessfully convince her otherwise.

The warrior would later be consumed by her vengeance, her anger holding back the poison crippling her and she would kill all in her path and eventually escaped to the surface.

The following takes place during An Eye for an Eye.

At some point, the Forgotten Warrior wandered into the Wilderness before collapsing from her wounds, where she was discovered by a farmer named Cole, who took him to Gohdra. Gohdra remarked that she had been mugged and asked for her name, in which she replied with Kaela, which was not her true name. She bonded well with Cole and eventually married him, having a daughter she named Taevel after her brother. However, the happiness would not last, as they would be killed during the Battle of Lumbridge and she reverted to her Vengeance persona.

Vengeance would appear on the surface of Gielinor during the Zamorakian Civil War, where she found a Zamorakian camp and slaughtered Lux and Jaxyys. When she attempted to kill Solmestix, the druid cowered in terror, wanting to see his sister one last time. Reminded of Taevas, she spared him, but ordered him to leave and never return to the Wilderness.

Bilrach ordered Vengeance and Jerrod to head to Menaphos to find information on soul magic and corruption. One of the areas of interest was Oreb, a former Teragardian Magister who had made the Sophanem Slayer Dungeon his home. Vengeance demanded that he give his knowledge to her commander, but he refused as he believed her simple and her commander a coward for not coming in person. When she threatened him, Oreb dismissed her and warned her to leave before he would do so herself, which she took as a challenge. She defeated him with ease and had Jerrod extract as much information as they could from him.

Vengeance later returned to the Wilderness at the Mage Arena where she vetted two recruits for their combat capabilities and morals; unbeknownst to her they were actually Bilrach's enemies, the World Guardian (who she also despised) and Adrasteia. The World Guardian convinced her to recruit them and she pitted them against several enemies, where she was left satisfied with the result and left. She later attended Bilrach's ritual to siphon human souls and witnessed the marker exploding on everyone, although they all survived. They then retreated back to Zamorak's hideout where she witnessed Moia overthrow Bilrach and swore loyalty to her.

The Forgotten Warrior is a playable character during Vengeance, a Fremnnik Saga which tells the tale of her finding her brother's killers to avenge his death. The player can choose between a noble and ruthless side to her vengeance, the former using honorable methods and the latter deceptive. There are four options the player can choose from at the end of the saga, depending on the path taken: