From the RuneScape Wiki, the wiki for all things RuneScape
(Redirected from The Five Princes of Misthalin)
Jump to navigation Jump to search

The Five Princes of Misthalin are first mentioned in the novel Return to Canifis. Father Lawrence explains that the five princes rode off to fight for their father's kingdom centuries ago against the invading forces of Lord Drakan's army from Morytania.

Of the five, only the youngest returned. The four that fell, the eldest Tenebra, Bran, Hywell and Henry are honoured for their sacrifice by the construction of a fountain that stands in the centre of Varrock. 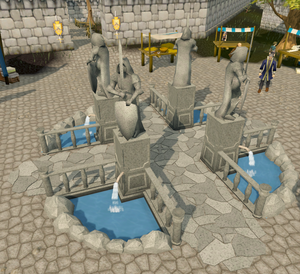 The fountain at the centre of varrock, the four statues represent the four fallen princes.

After the youngest returned, he inherited his father's throne. However, Tenebra was still alive, under the guise of the the Black Prince, a vampyre lord. Tenebra was still the rightful heir to the throne of Misthalin, and planned for his son Gar'rth to claim his birthright from King Roald. To do so, he started the War of 164, trying to turn the peasantry against King Roald. This ultimately failed when Gar'rth turned on his father, helping to kill him. Afterwards, Gar'rth was exiled from Misthalin to prevent him from being a figurehead for King Roald's enemies to rally behind.