Quick guide for The Firemaker's Curse

From the RuneScape Wiki, the wiki for all things RuneScape
< The Firemaker's Curse
Jump to navigation Jump to search

The lights dim after a short time, dealing 50-100 damage every few seconds. Lighting the fires postpones this effect.

If you come close to dying in this room, you will be rescued by the firemakers and restored to full health. If this happens, any activated pillars will remain activated, but all lit fires will be extinguished. 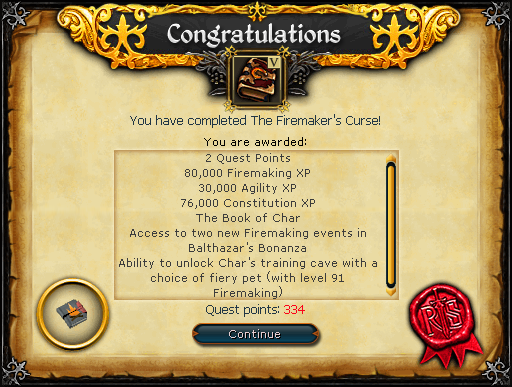 The Firemaker's Curse is directly required for the following quests/miniquests:

It is therefore an indirect requirement for the following quests and miniquests:
Retrieved from ‘https://runescape.wiki/w/The_Firemaker%27s_Curse/Quick_guide?oldid=35822812’
Categories:
Hidden categories: