From the RuneScape Wiki, the wiki for all things RuneScape
Jump to navigation Jump to search
Not to be confused with The Empty Throne Room.

The Empty Throne is a non-canon comic written and illustrated by Mod Jack, who uploaded it to his Twitter account.[1] It depicts Zamorak's rebellion against Zaros.

Zamorak leads his army to the Primum Statum temple in the Divine Palace where Zaros and his court reside. Zaros, however, is not present, prompting Zamorak to demand that he show himself. Azzanadra asks why Zamorak is at the temple, as he had been dispatched to the west. He dismisses Azzanadra, saying that he has business with Zaros. One of the Cardinals responds by saying that he and the Council of Cardinals speak for Zaros in his absence, but Zamorak continues to demand that Zaros face him. When that does not happen, Zamorak kills one of the Cardinals with a beam of energy, enraging Azzanadra. He kills three more Cardinals in the same manner before Zaros finally appears, sitting on his throne.

Zaros scolds Zamorak for his actions, saying that he should have been loyal. Zamorak lists his demands: that Zaros will abdicate his throne, relinquish control of the Zarosian Empire to Zamorak, and to leave Gielinor and never return, reinforcing his demands by threatening to kill Zaros with the Staff of Armadyl. Zaros refuses and orders his followers to kill Zamorak. Abraxas Carnifex, the father of ripper demons and Zaros's executioner, moves to attack Zamorak but is quickly killed by the Staff of Armadyl. Zamorak orders his followers to attack Zaros's forces but to leave Zaros for himself; Azzanadra orders his forces to kill the rebels.

The battle involves vampyres, demons, and Mahjarrat fighting each other. Zaros does not participate, observing the battle instead of supporting his forces. Zamorak personally confronts Zaros, who fights back with immense power but no precision or technique. Soon, he sends Zamorak into his mind threshold with a gigantic form of Zaros appearing before him. When Zamorak is unimpressed by the spectacle, Zaros decreases his size to normal and asks why Zamorak led a rebellion against him. Zaros retells the accomplishments they have made together, hoping to convince Zamorak to to rejoin him. As Zaros speaks, Zamorak becomes aware of events happening throughout the universe through the Staff of Armadyl. He sees and hears Char left to die in a cave, Nex victorious in battle, and Hostilius on Infernus. He becomes aware of Zaros's plan to awaken the Elder Gods.

Abraxas Carnifex was a character who appeared in Mod Jack's non-canon comic The Empty Throne. In the comic, he was the father of ripper demons and Zaros's executioner. After Zamorak begins his rebellion against Zaros, he orders his followers to kill Zamorak to end the uprising. Abraxas Carnifex was the first to attack, but was quickly killed by Zamorak using the Staff of Armadyl. 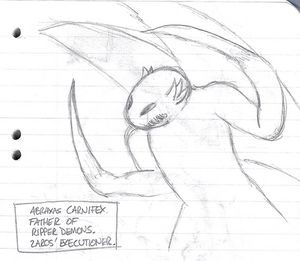 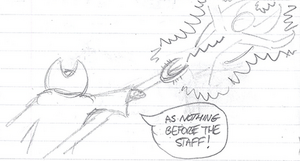 Abraxas Carnifex is killed by the Staff of Armadyl