From the RuneScape Wiki, the wiki for all things RuneScape
(Redirected from The Crucible)
Jump to: navigation, search
This article is about the removed minigame. For the area of the Warforge dig site, see Warforge.
For Kerapac's device, also called the crucible, see Kerapac's device.

The Crucible was a minigame arena north-east of Edgeville where members with a combat level of 60 or greater could participate in solo player-versus-player combat. It was the replacement for Bounty Hunter worlds that were removed with the return of the original Wilderness. The Crucible was not world-based, but instead used an instance shard world to transport players from all of the servers to the instanced arena.

It was replaced by Deathmatch on 26 September 2016. 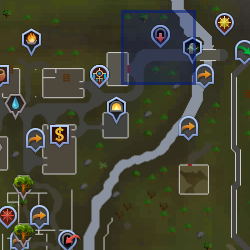 The location on the map 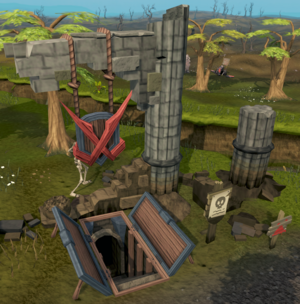 The entrance to the Crucible

The Crucible was located in a dungeon area just north-east of Edgeville, to the west of the bridge and shortcut to the Grand Exchange. Taking full advantage of the Crucible required membership and a combat level of 60 or higher. Free-to-play players and those under 60 combat could still enter the area, but could only watch the tutorials and walk around the waiting room.

A risk fee was charged for fighting within the Crucible. There were two components to the fee. One part which was based on your combat level and the value of your equipment (the more expensive your equipment, the lower the amount). This was paid to the victor when you lost a fight, so they got something in return even if you were not risking anything. If you risked enough with your equipment, this part of the fee was zero. The other component was a flat fee, which was paid to your opponent if you left the fight. You could retrieve the fee by talking to one of the bankers.

The origins of the Crucible are unknown, although it is known not to be man-made. Its custodian, Marv, believes that it is the result of the hatred and despair of the Wilderness that dripped down over hundreds of years.

Centuries ago, the Crucible became the hideout for a group of rogues that numbered in the hundreds, who used it as a place to live as well as storing their stolen goods from unwary travellers across the Wilderness. The rogues discovered that their base of operations was a place of dark power that amplified their feelings of anger, greed, and desperation, as well as any combative spells they cast. This corruption divided the rogues into several warring factions who fought each other amidst chaos and deceit. The Crucible itself was abandoned due to fear over its dark influences.

Several years later, after the feuds had ended and most with knowledge of the Crucible dead, one group, which would become Marv's ancestors, returned. They decided they could produce a profit as well as derive amusement from the Crucible by allowing warriors to kill each other within and subsequently looting any untaken spoils.

Before playing the game, talk to Marv, who runs the arena. He gives access to four tutorials on The Crucible, which explain the gameplay mechanics and rewards. Going through the tutorials will give one set of trophy bones for each of them, up to five total. 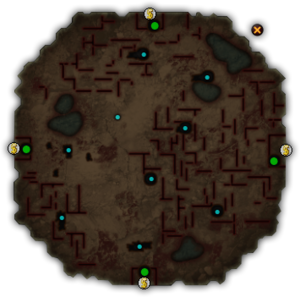 A map of the Crucible. The green and blue dots are fissures that players could travel between instantly.

The in-game interface of the Crucible.

Inside the arena, you were matched up with another player with similar combat skills, and were assigned as each others' targets. If you successfully located and killed your opponent, you could loot all of their equipment.

Fissures were sparsely scattered throughout the main playing field in the Crucible, along with two in each safe spot. There was one to leave, and one to enter the fray. They could be left-clicked to traverse to another fissure within the crucible at random. If right-clicked you got the option to travel to a chosen fissure within the Crucible, or to a safe spot fissure, along with the option to travel to a random safe-spot. Using a fissure would make you temporarily immune to your opponent's attacks. Some of the rewards from the Crucible gave an energy boost when using fissures.

Fissures could not be overused when in combat with your target, to stop people from being able to repeatedly use them to evade targets.

A corpse found in the Crucible arena.

Corpses were scattered across the Crucible's arena, and these corpses sometimes contained a Rogue's soul. You had to attack the soul and bring it down to low health and then direct it to its corpse. Upon looting a rogue's soul, you could obtain a pair of unique Rogue Gloves that could only be used within the Crucible.

There were five different types of Rogue Gloves:

You gained rank points by attacking the Supreme Champion. Each time you hit them, you would receive one rank point. In the beginning, every few rank points brought your rank up. There were 36 players on the highscores with the highest score being 10204.

Every half-hour, your target was removed, the Crucible arena became a safe area (no items were lost), and one of the players with the highest rank became the Supreme Champion (at least 50 players had to be on the arena).

After they were announced, the Supreme Champion was given access to a set of mighty weapons; Decimation for ranged, Annihilation for melee, and Obliteration for Magic. These weapons had special functions that made it easier to slaughter the masses. For the first two minutes, the Supreme Champion was invincible and could kill with impunity. Once the champion's invincibility was gone, they could be killed for their special weapons. Players who picked the weapons up could also use them, but they ran the risk of being attacked as well.

After a few minutes, the Crucible returned to normal. The special weapons were removed, the arena became dangerous again, and new targets were given. 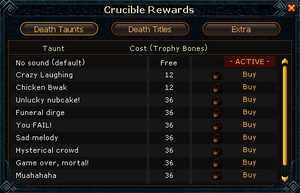 These were the rewards that you could buy at the Crucible by using your Trophy bones. Trophy bones were obtained from defeating enemies. Up to five could be obtained from the tutorials, one from each of them. The arena had to have at least 5 players in order for this to drop.