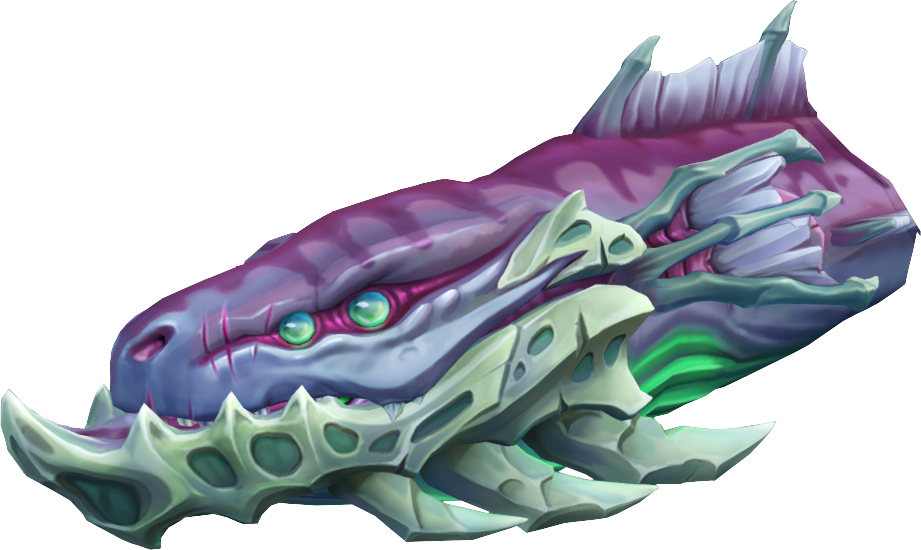 The Crassian Leviathan is the first boss inside of The Shadow Reef. After The Ambassador was informed by Oreb that the World Guardian was arriving with their allies, The Ambassador summoned the Leviathan and blessed it with Xau-Tak's power. 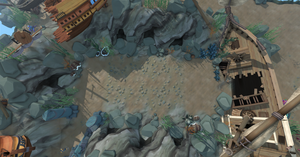 The arena of the Crassian Leviathan.

The main head of the Crassian Leviathan is found at the north end of a small, rectangular arena. It uses melee and ranged auto-attacks depending on how far the player stands from it. If standing at range attack distance, the boss uses its auto-attacks before using one of its two special attacks. The player can get additional seconds between auto-attacks if they don't stand within melee distance, as the ranged auto-attack animation takes longer than the melee one, making the Crassian Leviathan stand for longer in the side of the arena. After the boss has used enough attacks, it will shift to the opposite end of the arena, forcing the player to move past the other leviathan heads and through the pool of poison. The extra leviathans are not attackable but can lunge at players, dealing unblockable poison damage and stunning them.

When the Crassian Leviathan goes to the other side of the arena and is not attackable, it's recommended to use anticipation or freedom abilities to go through the arena to avoid being stunned by the leviathan heads. It's also recommended to use surge and/or bladed dive to go across.

The Crassian Leviathan itself has a moderately high defence and has the ability to heal itself 3,000 life points for each player fighting it every several seconds. Three players will cause it to heal 9,000 life points every time it heals itself. Players can reduce this amount by poisoning it, using either weapon poisons or the effect of cinderbane gloves or the upgraded bone blowpipe, which reduces its healing to 1,000 per player.

The special attacks of The Crassian Leviathan include the Head Crash attack and the Acid Breath attack.

The Head Crash attack consists of the leviathan slamming its head in the ground, dealing multiple hits of high typeless damage. This can be avoided by running to either the far left or far right depending on which side the leviathan is crashing its head towards; you should move to the far side of the destination of the sweeping head, ahead of it. Surge or bladed dive may be useful here. After the first Head Crash it then immediately uses the Head Crash attack again in the opposite direction of the first attack.

The Acid Breath attack consists of the leviathan breathing a deadly cone of green acid in front of it with a coned area-of-effect radius, dealing rapid hits of 6,000 typeless damage. This attack can be easily avoided by standing to the sides of the Leviathan's head. It is used at the start of each of its attack rotations. This attack will hit the entirety of the opposite end of the arena, so players should stay within distance of the main head.

Additionally, a drop from the generic Shadow Reef drop table will be given. The following table has a 3/20 chance to get rolled on for boss monsters and mini-bosses, and a 1/50 chance for other monsters when holding a Lucky charm (Shadow Reef)[d 1]: