Quick guide for The Brink of Extinction

From the RuneScape Wiki, the wiki for all things RuneScape
< The Brink of Extinction
Jump to navigation Jump to search

Note: There are several Ga'al around the city. Speak to any three of them. The locations below are recommended.

The combat portion of the quest is about to begin. Consult this table to find out what to pray against and which attack style to use. High-level players may find switching combat style unnecessary. Progress is saved after each room, and a bank is available just outside the cave.

In legacy mode, bring a weapon with more than one special attack (dragon dagger recommended). 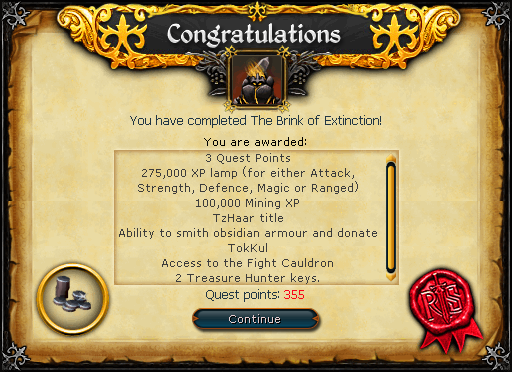 The Brink of Extinction is directly required for the following quests/miniquests:

It is therefore an indirect requirement for the following quests and miniquests:
Retrieved from ‘https://runescape.wiki/w/The_Brink_of_Extinction/Quick_guide?oldid=35621228’
Categories:
Hidden categories: