From the RuneScape Wiki, the wiki for all things RuneScape
Jump to navigation Jump to search
For the achievement, see The Blood Pact (achievement).

The Blood Pact is the 163rd quest. It brought the maximum quest point total to 300. It was the first new quest available for free players, besides tutorials, since Rune Mysteries, which was officially released in 2003. New free-to-play items were released with the quest along with the helmet of trials for members who had obtained 300 quest points. The quest also introduced a new dungeon packed with low level monsters that new players could train on. This quest marked the first appearance of a Signature Hero - Xenia. Through the quest, Xenia explains the combat triangle and has the adventurer use the combat triangle in action by fighting a melee warrior, a ranger, and a mage, respectively, with the appropriate weapon.

Dire deeds are afoot in Lumbridge Graveyard. A tomb lies defiled and rumours of baleful cults and profane rituals are whispered throughout the town.

The veteran adventurer Xenia has come in search of talented heroes to accompany her into the depths of Lumbridge Catacombs. Together, you will uncover a plot to awaken a slumbering evil. Can you save the citizens of Lumbridge from a fate worse than death?

Start the quest by speaking to Xenia in the Lumbridge cemetery. She will appear to recognise you and say that she sees a great hero in you in the future. She asks you for help dealing with some Zamorakian cultists that have kidnapped a young girl, Ilona, who was going to the Wizards' Tower to learn magic. After agreeing to help Xenia, enter through the catacombs entrance to confront the cultists. She will follow you.

Ilona being held hostage by the cult.

When you enter the dungeon, a cutscene plays showing the three kidnappers, Reese, Caitlin, and Kayle, taking their hostage deep into the dungeon. Kayle is hesitant about the ritual, but is quickly reprimanded by Reese, their leader, who says that Kayle is bound by the blood pact and that they cannot abandon their plan now. Reese orders Kayle to guard the door while he and Caitlin continue ahead.

After the cutscene is over, if you ask Xenia what a blood pact is, she says that it is something that Zamorakian cults do to swear loyalty to their leader. It is essentially not real magic, but it can have great power if someone believes strongly enough in it.

The battle with Kayle.

You will now find yourself in a large hall with Kayle standing opposite you. When you move into the front chamber, he will attack Xenia with his chargebow, injuring her. All of her life points seemingly gone, she will ask you to fight on alone and defeat the cultists.

Defeat Kayle using any form of combat; Xenia will recommend melee. He is fairly accurate for his level, easily hitting constant 10s on players with 1 defence and no armour. For lower levelled players, it is recommend that they get close to him while taking advantage of the walls on either side of the chamber to reduce damage. Using abilities such as Slice will allow you to do more damage. For rangers, Piercing Shot can be used and for mages, Wrack can be used.

After defeating him, you may ask him about the other cultists to which he says that Caitlin was a student of the Wizards' Tower and that's how they chose Ilona for the ritual. Reese was an acolyte in the Lumbridge Church who, along with Caitlin, came up with the whole idea. You may also question him about the trio's intentions, and he will explain that he really didn't know what he was getting himself into.

At this point, you may choose whether to kill him or spare him his life, either of which will cause him to drop his chargebow, which you may then take. Your choice will slightly affect some of the later dialogue in the quest, but the final outcome and rewards will be the same in either case. Additionally, your choice will influence Ilona (the aspiring-mage girl you are trying to rescue) after the quest, as she will choose to practice nonlethal magic if you spare either Kayle or Caitlin (the next enemy), but she will practice elemental combat magic if you choose to kill them. Her chosen magic does not affect future gameplay.

If you do not already have a Ranged weapon, pick up the chargebow that Kayle dropped and proceed to the next chamber. Caitlin, the second cultist, will be waiting across the room from you.

You will be forced to use long-ranged attacks against her as you will not be able to get within melee distance of her. She will attack you using Magic attacks, and thus it is recommended to use Ranged to defeat her, Ranged being superior to Magic in the combat triangle. She seems to be easier than Kayle, as even though her spells are more accurate, she does not hit as hard.

After defeating her, operate a winch found in the room to cross to the other side of the room. You cannot do this while she is attacking you.

When you question Caitlin about the group's intentions, she says that the dungeon is actually the tomb of Dragith Nurn, who was a powerful necromancer. It was he who had built the catacombs for himself and the cultists had planned to use the power stored in his body to unlock the secrets of his work and gain power over life and death.

Again, players will have the choice to kill her or to spare her; whichever choice you make, Caitlin will drop her staff on the floor. As with Kayle, your choice will affect some dialogue in the quest, and it will slightly affect Ilona's character development after the quest, depending also upon whether you killed or spared Kayle. The quest's final outcome and rewards are unaffected.

If you talk to Xenia about Dragith Nurn, she will explain that he had a magical workshop beneath Lumbridge and that he used to rob graves for his necromancy experiments. She convinced him to stop all of them, so he trapped all the undead in the lower level of his workshop and sealed it off. The upper level of his workshop is where the tomb lays. Contrary to what the cultists believed, Dragith Nurn used this tomb to hide the entrance to the lower level, where he buried himself along with the undead.

The final battle with Reese.

After speaking to Xenia, descend the stairs at the end of Caitlin's room to confront the last member of the trio. Reese, the final cultist, will be waiting for you. After speaking to him for a short while, it will become clear that you cannot dissuade him from his plans, and he will attack you. You may defeat him by using any means of combat, but Xenia recommends using Magic, namely Air Strike. 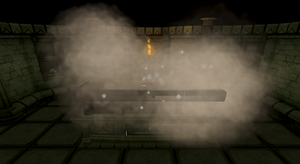 After defeating Reese, you may further question him about his plans. You will once again have to choose whether or not to spare his life. However, even if you choose to spare Reese, he will commit suicide by drinking from a vial of poison, realising that his plans had failed. The coffin in the room to the south will crumble and reveal a set of stairs out of the catacombs. Untie Ilona, and she will relate her story to you back at the surface.

After defeating Reese, you will appear outside the Lumbridge Catacombs with Xenia and Ilona, and Xenia will reward you. Congratulations, quest complete! 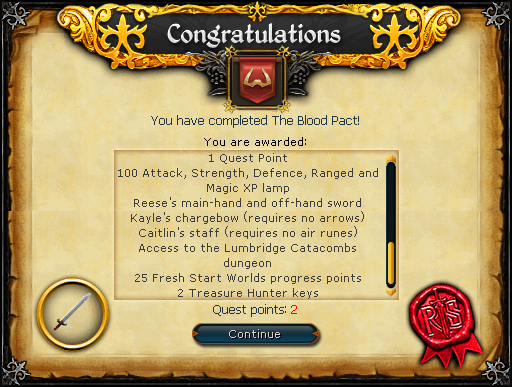 The Blood Pact is directly required for the following quests/miniquests: