From the RuneScape Wiki, the wiki for all things RuneScape
Jump to navigation Jump to search
"Marketeer" redirects here. For the thievable NPC, see Menaphite marketeer.

Felix the Black Marketeer is a businessman who sells raw materials for gold coins (as opposed to chimes, the currency of the Wushanko Isles) in the player-owned port. His black market is the only place in the port where regular Western currency may be used. If your ship requires hours in drydock, he will repair it instantly for coins. Finally, he is the key figure of the port random event A Simple Favour. He trades within the warehouse which is located in the northwest corner of the port, directly west of the pub.

When asked about his past, he says that he was a honest man who lived in the Pincer region. There were rarely slavers there, as he says the khans in the area had armies of ships and soothsayers. However, western slavers arrived and his family was kidnapped and enslaved. The slavers told him that he would see his family back if he paid the ransom, so he did; however, more ransom notes kept arriving. The player suggests that the kidnappers are doing this so they can get more money from him and wonders if his family is dead. However, Felix denies this and one day hopes to see his family again.

According to Felix, he collects his goods from the Blazing Lantern clan (based in the Hook region), or finds them himself. He says they have been "misplaced," using a criminal's slang for stolen goods. He says his "contacts" can get him anything.

There is more to his story than he has told the player. During the introduction to the minigame A Simple Favour, the Death Lotus Assassin who visits Felix coerces him into helping by threatening to reveal details about his past. Felix says that he will not kill for the Death Lotus Assassins again, implying that he has done so in the past.

His stock resets at midnight UTC. Only one type of item is sold each day. Once his stock has run out, he will no longer appear in the Visitors interface, but will remain in the warehouse. If stock has run out, the time until his stock is replenished will be displayed in the shop. The goods depend on the region you are currently on. For example, if you are on the Bowl Region, he will offer Jade and any other resources below it. 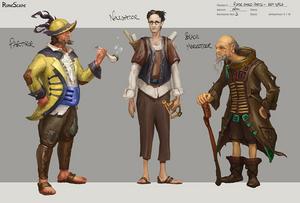 While he operates a covert business, he prides himself on being completely honest in his dealings with customers. In addition to selling bamboo and other port resources, he can repair a damaged ship instantly — for a cost. Depending on the damage on the ship, it will take 1 to 6 hours for it to finish repairing without Felix's help. The cost for a ship damaged for 1 hour costs 20,000 coins, while one that is heavily damaged (6 hours) can take 120,000 coins to repair.

The Black Marketeer speaks in: