From the RuneScape Wiki, the wiki for all things RuneScape
(Redirected from Thanksgiving 2008 Event)
Jump to: navigation, search

A player doing the Give Thanks emote.

The 2008 Thanksgiving event consists of two parts, the Hidden Turkeys and the Turkey Carnage. It was available from 26 November to 1 December 2008. Although considered an actual "Holiday Event" there was no notice in the Behind the scenes message.

There were ten turkeys in disguises around some corners of the free-to-play world. It was played in a similar way to Penguin Hide and Seek.

To start the search miniquest, players had to talk to the Cook's brother in Lumbridge. He would then give players a turkey book, which was used to record the turkeys found so far. If players spotted one (by spying on them in exactly the same way as a penguin), they would give a hint to find another turkey. Once players had found all ten, they were rewarded with a cornucopia, which can 'store' up to 140 life points by means of combining healing effects of any foods. After killing a certain amount of turkeys, players were also rewarded with the "Give Thanks" emote. 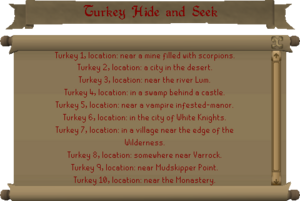 Locations of the turkeys to spot (The turkeys roamed around!):

The hidden turkeys were different to normal turkeys - their heads were covered with objects mentioned above, but their tails can be easily observed.

If players preferred a more direct approach to get to the turkey drumsticks, they could find groups of undisguised turkeys waddling about in groups throughout the previously mentioned places, notably south of Falador. Killing the turkeys would drop raw turkey or raw turkey drumstick or (rarely) a cornucopia.

A cornucopia is still dropped by slaying certain birds.