From the RuneScape Wiki, the wiki for all things RuneScape
Jump to: navigation, search
Thalmund's Forge? (edit) 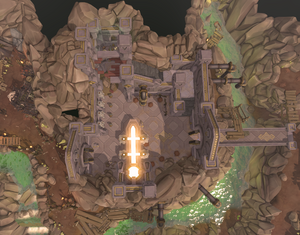 Thalmund's Forge is an area that is part of the Warforge archaeology digsite. It consists of a number of forges and anvils, as well as burial forges and anvils that have been built by the Imcando dwarf Thalmund. Players may also use the imcando forge and imcando anvil to create an imcando mattock, once they have learned the ability to do so from Thurgo.

Players must use the 12 goblin tribe keys to unlock the forge doors in order to gain access to the forge. When players open the doors, the forge is powered down, and can be re-powered by pulling a lever close to the main furnace. This also completes the Into the Forge mystery. There is also a second lever to open the southern door that could not be opened with the goblin tribe keys.

Unlike other areas in Archaeology digsites, Thalmund's Forge is an instanced area.

One minute after entering the forge, a randomly selected dwarf from the list below will teleport into the forge at the northern entrance. The dwarf will walk around the forge to four places of interest, making a remark about the first three, and then teleport away at the fourth.

At the end of the main forge, players can find the Hand of glory (Warforge). In order of being found, this hand is usually used with the Luck of the Dwarves ring.

The update history project is a work-in-progress – not all updates to this topic may be covered below. See here for how to help out!
Retrieved from ‘https://runescape.wiki/w/Thalmund%27s_Forge?oldid=33086929’
Categories:
Hidden categories: