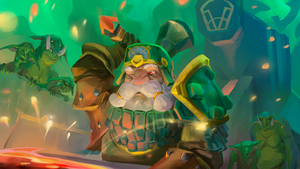 Thalmund was a Imcando dwarf that lived in the Third Age.

He was captured by goblins and sent to Warforge to create a massive forge in which weapons could be created. Although he initially refused to help the goblins, he was eventually broken from prolonged torture.[1] To prevent himself from going insane, he requested writing supplies so he could write letters to Kili, even though he knew they would never be sent.[2]

Thalmund created his own forge, with knowledge passed down by his father.[3] He was able to provide heat with both his flame gloves and several inactive charyou seeds.[4] Once the forge was up and running, the goblins quickly named it Warforge, though he called it Bertha.[5] Upon its completion, Bandos immediately ordered the construction of several weapons. Thalmund complied, knowing that he was less likely to be punished because he was an imcando master smith.[6] He showed some pity for the goblins however, as they were treated miserably, which he assumed was the cause of their aggression on the surface.[7]

As new weapons were being made, Thalmund became irritated with the quality of the metal he was working with. Bandos then ordered him to mass produce bronze weapons for his goblin forces. Thalmund was perplexed, as he knew the other gods were using steel, yet Bandos was sticking to bronze. He knew the god had murderous intentions for the goblin race, since bronze was easy to produce. However, Thalmund took the additional step to make it the "best bronze" that'd ever exist - warforged bronze, which was even better than some steel.[8]

He was able to build a distillery and a makeshift oven. Despite being held against his will, he became fat from the food the goblins gave him, as they believed that they would build favour with Bandos if they pleased him.[9] He admitted that he saw the goblins as his new family, and that he was doing the best he could to get them out alive.[10]

When Bandos was banished from Gielinor by Guthix, he crushed Warforge to prevent others from using his armies.[11] Thalmund was extremely enraged by this act, and the goblins that were still inside resorted to open warfare even though Bandos was no longer around.[12] Due to Thalmund's ability to make weapons, the goblins rarely went to the forge, which he initially mistook as fear of either Bertha or him, but hoped it wasn't the latter. They would only come whenever the goblins requested weapons and information; in return, he requested peat. He had been grinding some of the peat to make an explosive powder in the hopes that he could break out with his new family; it is unknown if he was successful or not.[13]