From the RuneScape Wiki, the wiki for all things RuneScape
Jump to: navigation, search
Tetrahedron 4? (edit)

A tetrahedron 4 is an item used in Ritual of the Mahjarrat. It may be found by searching a pile of rubble on the immediately accessible part of Kethsi. This is not far north west of the fairy ring. There are three other Tetrahedrons, making four in total.

The tetrahedron should be taken to the underground area at the end of the agility route, along with the other three tetrahedrons, and placed in an indentation in the wall. This will give a letter which, when combined with the letters with the other tetrahedrons, will form a code that corresponds to a location. The code's location can then be found using the strange device.

This ultimately allows you to find a key to access the locked room in the underground area. 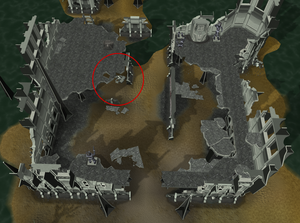 The location of the rubble where the tetrahedron is found
Retrieved from ‘https://runescape.wiki/w/Tetrahedron_4?oldid=34730043’
Categories: