The Temple at Senntisten is the sequel to Desert Treasure, wherein you assist the Mahjarrat Azzanadra in re-establishing contact with his lost god, Zaros.

Ali the Wise has been talking to one of his 'old friends' - a certain Dr. Nabanik - about your various dealings with the mysterious Mahjarrat. As a result, Dr. Nabanik thinks you would be the perfect candidate to aid him in his restoration of the temple beneath the Digsite, but to what end?

And who really is the mysterious Dr. Nabanik?

Start the quest by talking to Ali the Wise in the small north-westernmost building in Nardah. Consider using Fairy ring code dlq and heading south to get into Nardah.

Ali starts talking about Zaros and his conquests over the world, with the help of the Mahjarrat. He remembers talking to one of his colleagues on the matter, Dr. Nabanik who, acquainted to you as well, has asked for your help. He will inform you that Nabanik can be found in the courtyard of the Exam Centre, south of the Varrock Dig Site. If you ask for help to get to Nabanik, he gives you a Dig Site pendant in order to conveniently reach the Varrock Dig Site. The drop trick does not work to obtain extra pendants.

At your service![edit | edit source] 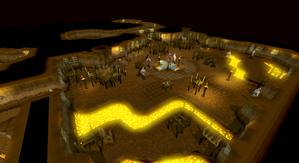 Outside the exam centre, Dr. Nabanik reveals that he is in fact Azzanadra, the Zarosian Mahjarrat who was freed during the events of Desert Treasure. He informs you that he needs consent and authorization from the lead archaeologist to start reconstructing the Zarosian altar beneath the Varrock Dig Site.

Talk to Terry Balando inside the exam centre. As a reference for Dr. Nabanik, you will now be quizzed on Dr. Nabanik's credentials; any answers will do. After convincing the lead archaeologist that Nabanik can be trusted, he will give you a Restoration certificate. Head back to Dr. Nabanik, who will take the certificate off you and tell you to meet him at the altar. To access the site, he provides you with a piece of rope.

You may use another charge on the pendant for speedy travel. In the Varrock Dig Site, use the rope on the north eastern-most winch and operate it to enter the Digsite Dungeon. Walk over to the ruined altar in the southern part of the dungeon, and meet up with Azzanadra.

To rebuild the altar, Azzanadra requests you to obtain two rare items for him:

Azzanadra hands you a ruined backpack, containing a battered letter and a heat globe. You must read the letter to be able to continue on with the quest. The letter advises you to bring runes to "draw them to me just a short distance", speaking of more heat globes in the fortress.

You must talk to Azzanadra about each mission, or you will not be able to complete either of them. The order of retrieving the artefacts can be chosen by you. 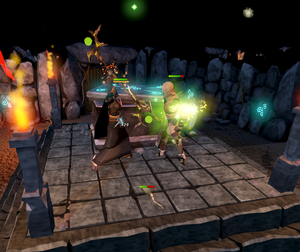 The Barrows is an area located in the interiors of Morytania, east of the town of Mort'ton.

First, kill the 5 Barrows brothers found in their tombs below the ground. Next, enter the underground crypt via the tomb of the missing brother and find your way to the centre of the dungeon.

Kill the final brother that spawns in order to receive the Barrows icon, along with the regular Barrows rewards. Search the chest to get the Barrows icon. You may use up to 3 Barrows amulets to skip fights with the more dangerous brothers; it is recommended to use them on Dharok, Karil and either Verac or Guthan, depending on your gear.

The icon simply absorbs the power of prayer surrounding it, and does not cause the prayer-draining effect in the Barrows crypt itself, and thus the effect remains after the quest.

You will encounter some aggressive high-level icefiends and waterfiends, therefore food and armour are recommended, even if you have a high combat level.

The Frozen Waste Plateau contains the Ghorrock Fortress, which is not considered to be a part of the Wilderness, and so once in it, you are entirely safe from player killers and can teleport out of it. The steel dragons in the area are not aggressive.

The suggested route to reach the Ghorrock Fortress is by using the canoe near Erjolf, the Fremennik met during The Tale of the Muspah, at the west of the snowy hunter area (or use the fairycode dks, head west down the mountain, walk north and follow the west bank). Use the canoe to go to the Mahjarrat Ritual Site Cavern, which is marked on the minimap by a dungeon icon. Walk towards the dungeon, but do not go down. From there, head east to reach the fortress. Alternatively, you can also use a Mask of Gelatin to teleport to the cavern, exit, then head east.

The entrance to the fortress grounds is blocked by a large block of ice and snow. Place the heat globe you obtained from Azzanadra on the pedestal just on the north side of the entrance; the pedestal will develop an aura of orange light and the block of ice/snow slightly melts. A "Squeeze-past" option becomes available from the ice block. This has no Agility level requirement. 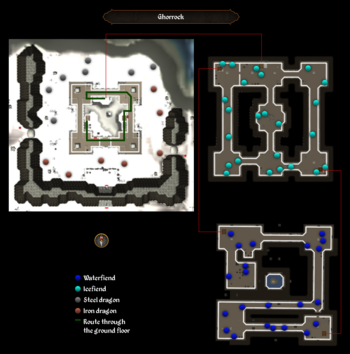 It is recommended that Auto Retaliate be set to 'OFF' while in the dungeon to avoid being distracted by the waterfiends and icefiends. Also, protect from magic will reduce damage taken from the fiends.

Note: As of August 2020, the wandering waterfiends and icefiends seem to have been removed from this level. (Those trapped in ice blocks will still spawn and attack you when freed)

You find yourself in the upper level of the fortress dungeon. The area you want to reach is the south-west corner of this level. Unfortunately, the direct path is blocked by ice, therefore you must melt some of it by using the heat globes you will find inside the fortress. 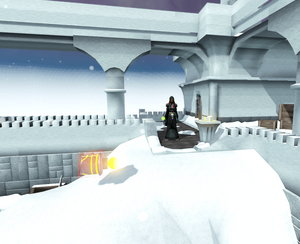 Pushing the heat globe down the slope 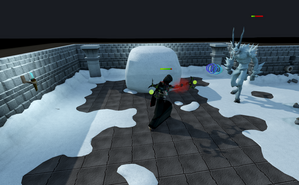 A player fighting the ice demon.

After climbing the ladder, run west a few rooms to engage with the level 98 ice demon. It attacks with both ranged and magic, but as its magic attacks hit harder, Protect from Magic is recommended over the range counterpart. The ice demon is completely immune to water magic. Swiftly kill the ice demon to get the Frostenhorn as a drop.

If you die or teleport away after killing the ice demon but before retrieving the Frostenhorn, it will appear outside the trapdoor leading underground.

If the Frostenhorn does not drop when killing the ice demon with ranged or magic attacks, switching to melee may fix the issue. If melee mode doesn't solve the problem, turning combat to legacy mode is an alternative solution. You cannot receive Frostenhorn if you are in a group.

Return to Azzanadra however you wish. Teleporting to him via Ali's pendant/Dig Site pendant/Archaeological Journal is a suggested route. Azzanadra will be in the Digsite Dungeon where you left him, but he will have finished restoring the altar, in quite an impressive fashion.

He will tell you that you need to retrieve a last item from someone just outside, by the winch. Go up the winch and just west of where you entered, you will find the assassin who tricked you during Devious Minds (the assassin may instead be standing near the other winch to the south-west). Talk to him and he will give you the item Azzanadra wants – the relic you unwittingly helped him steal from Entrana. Pass on the relic to Azzanadra downstairs.

A cutscene plays, where Azzanadra opens a communication portal and contacts Zaros himself. As the connection between worlds is established, Zaros's influence apparently returns to the world in a small way. This is seen in the cutscene as, throughout the world, strange things occur.

Talk to Azzanadra again to complete the quest and receive your reward. 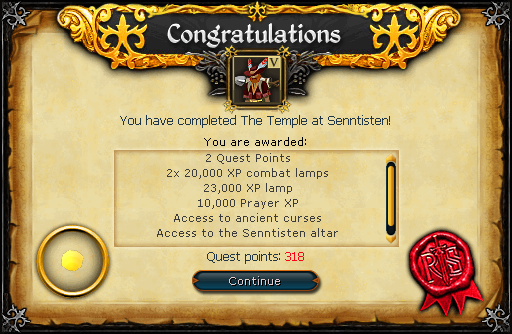