Not sure how to code this though.

How about a category for Carapace armour, or consolidate all into a "crafted armour" category? It's identical to batwing, imphide, snakeskin, spider silk...

I clearly made a mistake on the category request for crafted armour. The carapace matches the ones I said, but all the created armour doesn't; still working on them all.

They do indeed. The carapace material itself needs some sort of category though; for now I've overridden the quantity of components received, but it doesn't match any I could find in the table.

This issue was caused by another user inflating the template with dozens of stupid aliases. I've reverted the changes and leather should be properly recognized as a plank now. MolMan 17:47, March 17, 2016 (UTC)

Where on an item page should this template go? Will fill it in as I train the skill, just want to be consistent with everyone else. -Shaun Dreclintalk 23:34, January 28, 2016 (UTC)

Generally put it after 'normal uses', but before 'where to get' (like dropping monsters sections). Above trivia and navboxes, below equipment bonuses and such. Use a header of ==Disassembly==. Use common sense. Also check out the invention style guide. Cheers! 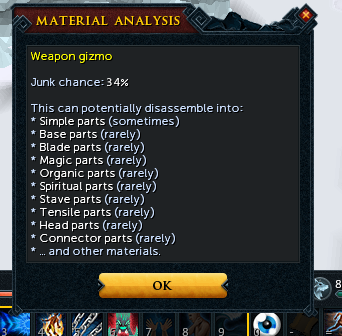 So, some materials that give special components do not have a 100% chance of doing so. This includes cabbages and low level culinary gear from RFD quest. What should be done for "compqty" variable? If it includes special, how would it work for these types of items?

Not to mention it can be misleading for high level gear, since for example, Death lotus chaps gives 8 components and 3 specials, for a total of 11. How would this be indicated especially for those that do not guarantee specials? --Jlun2 (talk) 23:02, February 5, 2016 (UTC)

I noticed when using category templates, the total materials will NOT account for 100% special components. For example, on Bandos helmet t70 melee helm lists total materials at 6, but bandos helm will give 100% 1x Bandos comp, so actually gives 7 components. I see above that this was discussed for those items that do NOT give 100% components, but I wanted to make sure conclusively what we are doing for items that DO give 100% special comp. IMO it would be better to just do a unique box and include the special in total, rather than use a category, for these instances, unless there is good reason to use category boxes as much as possible? I feel like not including the special components in the total is very misleading, and could result in people editing back and forth adjusting for whether or not to include. (EG, this is exactly what I did when I went to edit Bandos helm, because I first built the Armadyl helm box as a unique item at 7 total materials, and noticed Bandos helm seemed to give less materials as it was listed at 6 on wiki, so I bought a Bandos helm and disassembled myself, noticing it gave 7 because of the special.) Whatever shall we do?

I should also point out that User:Gaz_Lloyd/Invention guide says "make sure the compqty is equal to the total including the special components", but RuneScape:Style_guide/Invention says "Material quantity should never include any sort of special materials", so that just adds to my confusion.

(Side note: I added the disassembly info on Armadyl buckler and adjusted Armadyl helmet and Bandos helmet so depending on what we decide, those pages may need "un-edited". I won't make any more adjustments to this until how to handle it is determined for sure). Myles Prower aka Fyre Foxe (talk) 07:13, February 16, 2016 (UTC)

Sorry, we've decided on not including special components, because we're trying to base it on the internal categories. I'll update Gaz's guide. MolMan 15:19, February 16, 2016 (UTC)

Okay, great! I'm good with whatever the decision is, just wasn't clear to me what that decision was at the time. I checked out Template:Disassemble/doc as you mentioned Mol Man, and I might suggest making a more prominent note somewhere in that documentation that says DO NOT INCLUDE SPECIAL COMPONENTS IN TOTAL MATERIALS; I know the usage says excluding special comps, but I just think this is going to be one of those things that will come up again with others, so more documentation is better than less, that is, noting this bears repeating. Also, the tooltip (hovering the ?) on "Total materials received" still says "INCLUDING SPECIAL" so that should be updated as well. Perhaps even consider adding a tooltip next to the "Special (100%)" heading on the template that states "Special components are NOT included in the Total materials received", or something to that effect? Just my thoughts, anyway. (Oh, and I will double check the 3 pages I mentioned updating to make sure they get re-updated properly). Myles Prower aka Fyre Foxe (talk) 15:48, February 16, 2016 (UTC)

On every page I checked. Two examples: Guam_tar#Disassembly and Template:Disassembly.

It's a known error. Wikia staff are working on the problem. 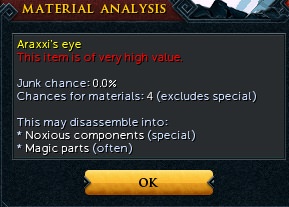