The tech tree system relies on completing tasks to earn currency for that specialisation. The currency is then used to unlock blueprints, which can then be researched like other Invention discoveries.

Tech trees can be unlocked at level 40 Invention. In order to begin unlocking the items in tech trees, one tree must be chosen to specialise in alongside the human tree. This can be done by speaking to Drorkar in Keldagrim palace furnace, or Oldak in his lab in Dorgesh-Kaan. (The other NPC does not need to be spoken to.) The specialised tree earns 50% more currency from tasks. Switching technology tree costs 100 currency of the discipline currently specialised in. 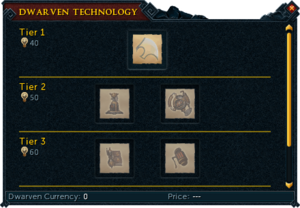 To unlock blueprints in tech trees, tasks must be completed to gain currency. These tasks involve handing in requested items or materials. A new task for each field is received at 00:00 and 12:00 game time (UTC), and a maximum of five can be held at once in each field. After five are held, no new tasks are given. Upon completion, tasks will give 10 currency in the respective field. The focused tech tree receives an additional 5 currency per task, for 15 total. Currency can be spent on blueprints at any of the technology noticeboards found in Dorgesh-Kaan, Invention Guild and Keldagrim. 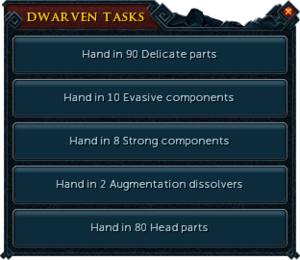 Tasks are accessed from a technology noticeboard and are completed by simply clicking the button which labels them. Both tasks may be completed at either site: Keldagrim or Dorgesh-Kaan. The required items are handed in without confirmation, regardless of the status of the item - partially used rod-o-matics (with or without perks), junk refiners, and fishing accumulators are all accepted. Tasks cannot be completed if 500 currency is owned in the respective technology.

Once every blueprint is purchased from both tech trees, no more tasks will be available.

For the 'Hand in any 4 empty Gizmos' task, they can be any mix of the three Gizmos.

Switching technology tree costs 100 currency (7 tasks at 15 currency per task) of the discipline currently specialised in. If switched, it would need 27 tasks (7 for switching and 20 for chosen tree) instead of 30 tasks for the other tree. 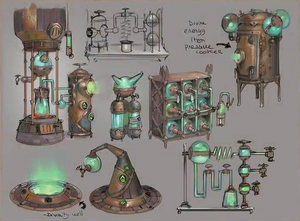