Tavia's fishing rod is a fishing rod and hero item rarely obtained from Deep Sea Fishing. It increases the success rate when fishing by 10% when wielded.[1]

The rod is obtained by finding a rare red uncharted island map from fishing at the Deep Sea Fishing hub, which brings players to Tavia's island, a pre-generated isle where the rod is found. Players may also rarely receive an additional red map when purchasing an uncharted island map from the Travelling Merchant's Shop. Unlike Hazelmere's signet ring, the map does not require the luck of the Dwarves to obtain.[2]

Tavia's fishing rod has a chance of granting all three Deep Sea Fishing boosts (5% additional Fishing experience, a 10% chance to gain an additional catch, and a 10% fishing rate boost) for 10 minutes to the player using it, and for 2 minutes to the surrounding players. When the effect activates, the following message appears in the chat box for the rod's user: The fin of Arkaneo shines, tugging hard at the water resulting in a splash that grants all deep sea boosts!

The surrounding players receive the following message: You're hit by a nearby splash and gain a deep sea boost for the next 2 minutes.

The fishing rod may be augmented by using an augmentor on the rod. 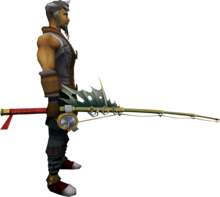