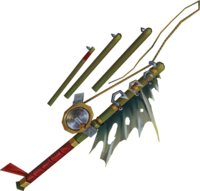 Tavia is a legendary fisherwoman who lives on an island in the Uncharted Isles. She is the original owner of the hero item, Tavia's fishing rod. When not at home, she is out at sea fishing or searching for the giant sailfish, Arkaneo.

[My father] used to tell stories of the elusive Arkaneo to lull me to sleep. A magnificent animal, the most beautiful sailfish he had ever seen. It has been two years since he left us and I still dream about his stories. I haven't stopped searching. I won't rest until I finally catch her. I will make my father proud.

Tavia's Fishing Notes, found on Tavia's island, tell the tale of her late father, a fisherman who also sought to catch Arkaneo. She recounts his stories of trying to catch the giant sailfish, which inspired her to do the same to make him proud. The notes detail her semi-successful attempt at catching Arkaneo, which resulted in Tavia acquiring the sailfish's fin. Not wanting to let it go to waste, she attached the fin to her fishing rod as a trophy.

Transcripts Tavia is the author or co-author of: