From the RuneScape Wiki, the wiki for all things RuneScape
(Redirected from Taverley Slayer Dungeon)
Jump to: navigation, search
Not to be confused with Taverley Dungeon.

The Burthorpe Slayer Cave is a small dungeon located northeast of Taverley in Asgarnia. It contains several types of monsters that players can fight.

The location of the entrance 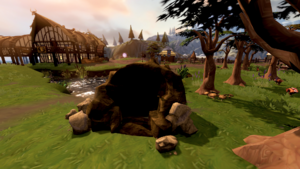 Players can enter the dungeon through the cave entrance located in Eastern Taverley, immediately south of Ewean's Grove.

At the southern end of the cave is a Subterranean spring with a "Collect water" option. This is used during the Druidic Ritual quest, when players can get Living water from the spring.

Attempting to collect water before or after this quest, however, yields the message "You don't have any use for this water."