From the RuneScape Wiki, the wiki for all things RuneScape
(Redirected from Task set)
Jump to: navigation, search
For sets of tasks, see Achievements.

The original design of the elite tasks set, as previewed in a Developer Blog 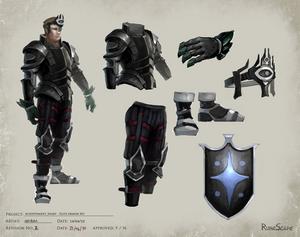 The tasks set is the name of the complete set of equipment rewarded by completing 12 area achievements, formerly called tasks or Achievement Diaries. Each equipment piece is named after an area of Gielinor where the achievements are done, e.g. Ardougne cloak. The first equipment piece was the Explorer's ring, rewarded for completing the Lumbridge achievements, which was the original starting point for new players. There are four tiers for each equipment piece based off of each of the achievement difficulties. At the highest tier, most of the components are Tier 60, except for the Wilderness sword 4 which is Tier 70, and the untiered components such as the Tirannwn quiver or Daemonheim aura.

According to Mod Mark, "The plan with Achievement Diaries is to eventually release a full set of equipment, making up the 'Achievement Diary set'. Similar to the Barrows gear, the full set will give you access to some special abilities."[source needed] It is not currently known how many more area achievement sets will be created, due to there only being one more possible addition to the equippable armour space (pocket slot), but Jagex have stated they may double up some slots.

Unlocking any component of the tasks set will also unlock a cosmetic override of it.

The current components of the tasks set are listed below.

Components and their abilities[edit | edit source]

A b indicates that a temporary boost may be used to reach that level.

In addition, the player also needs to have completed all quests or be level 99 in at least one skill.