From the RuneScape Wiki, the wiki for all things RuneScape
Jump to: navigation, search
The Old School RuneScape Wiki also has an article on: osrsw:Tanya
This article is about the Shadow of the Storm character. For the tanner, see Tanya Hyde.

Tanya is a dark wizard who followed Denath to Uzer in order to summon the demon Agrith Naar. She considers herself to be a future queen of RuneScape, which will be brought about by Agrith Naar's power.[1] As such, she considers herself to be above menial tasks such as carrying objects like the demonic sigil mould[2] and considered Josef to be a weak fool who deserves to be crushed.[3]

After Agrith Naar was summoned, she fled the ritual chamber only to be killed by ghosts shortly afterwards. 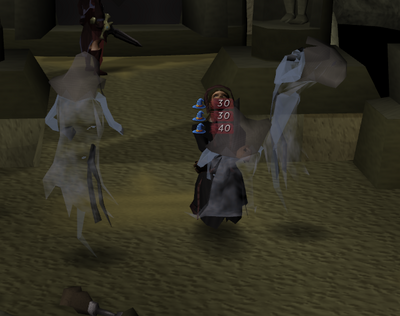 Tanya is killed by some ghosts.