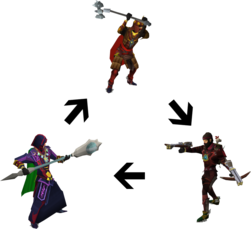 Wearing an item of the wrong class in any slot except the cape will penalise your accuracy. A percentage of the item's Armour bonus is subtracted from your Accuracy stat: 150% if it is strong against your class's weakness, 80% if not.

Tank armour provides the largest Armour bonuses. Aside from Nex armour, it is the only armour type to provide a life point bonus. Tank armour also reduces damage in PvM. Most armour in the game is of this type.

Power armour gives less Armour bonus than Tank armour, but it has a damage bonus similar to jewellery. The damage bonus increases with the required level of the armour. Nex armour is unique among high-level power armour because it has a life point boost.

The damage bonuses from Power armour rise with the required level of the armour. A full set provides an approximate 13% increase to a weapon's damage, assuming the armour and weapon are of equal level. Should a Fast or Average speed weapon be wielded, any damage bonuses will be multiplied to compensate for the player's larger damage stat.

The total damage bonus from a set of Power armour is distributed as follows:

The update history project is a work-in-progress – not all updates to this topic may be covered below. See here for how to help out!
Retrieved from ‘https://runescape.wiki/w/Armour?oldid=32828892#Tank’
Category:
Hidden categories: