Based at the Elder wand of Harry potter?--

If you are the lucky player that gets the wand would it be possible to just log out and bypass the whole fighting lark, thoughts? Donzaloog20 (talk) 19:18, March 26, 2013 (UTC)

Yes, presumably, if you were lucky enough not to be attacked. Remember that you can't log out until 10 seconds after the end of combat, and after that message gets broadcast to the area, you'd be pretty lucky to avoid getting attacked by anyone.  —The preceding unsigned comment was added by 96.29.169.125 (talk).

It's no glitch. People are just selling this item for a higher price than the GE's price. It's a new item, and it's rare, so some people may get greedy and sell it overpriced. The price for the wand, called the "street price", is ~25m. And that's the price people are selling it on the ge.

I just instabought this item on grand exchange for 11,498,138GP for all those who would like to know. Your Welcome.

Does winter storage work on the wand? That way you could instantly teleport it to your bank before anyone kills you.04ismailjj6 (talk) 20:00, April 23, 2013 (UTC)

Winter Storage does not work.

Any reason why it is dropping in price so fast?

What happens if you find the wand[edit source] 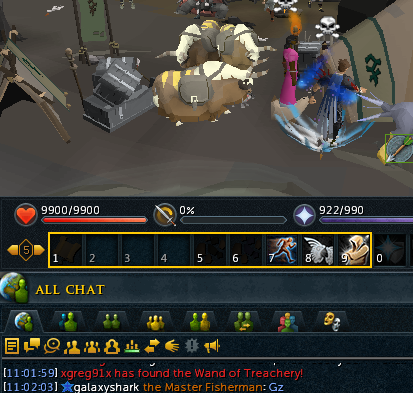