From the RuneScape Wiki, the wiki for all things RuneScape
< Talk:Treasure Trails
Jump to: navigation, search

If anyone wants to see the working for the data, I put it here. The source is the livestreams, referenced on the page.

In the Clue Chasers discord after looking through thousands (~40k) hard/elite clues, we didn't find any clues that didn't have the prismatic large star in the last slot of rewards when it was received. Using the information provided by the wiki.

"The table that all clues can pull rewards from (which includes god pages, meerkat pouches and scrolls, purple sweets, etc) is positioned in the top level droptable for each clue tier. This means each clue tier has a different chance to access it.

In addition to accessing it normally, if the clue doesn't generate a reward by the time it reaches its last reward spot, it will give an item from this table."

We do not have evidence of a prismatic star not being given in the last slot of the clue, leading us to suspect it is in the general table.

It says 6, but maybe the master doesn't count towards it? 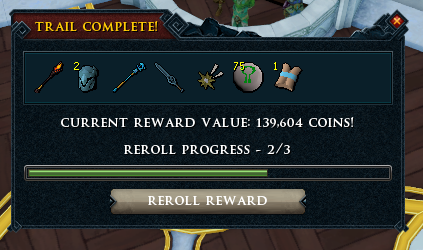 Yeah, the master is just an add-on in that sense I believe.

Something that would be nice would be estimating an average (possibly and/or median) value for each tier of clue. This would, potentially, give a base guideline for when it is worthwhile to reroll. As such, it might be good if values for items that give Fortunate components not be included - or at least having that option... just a thought

What I have so far (I have been just tracking average, including the 200k+ items)

for 19 elite clues, I have an average of 315,442 (rounding everything to 3 digits, and is based on what the value listed was, at time of completion)

Even if it isn't tracked by clue, perhaps use a formula based on reward chance?