Since i finished the quest, and unfortunately, took no screenshots for it, I thought i would write down what to do in this quest. Its not bad, but it definately could be improved by others doing it. If others could put pictures and update information about this, that would be great.

Btw, i think the reason why its considered a miniquest is probably because of the reward type, the length, and the fact that there is going to be a sequel of What Lies Below.--Pkthis 22:04, 4 March 2008 (UTC)

This is not a quest, it's a miniquest. The reward is a minigame that can be played daily. I don't know how to change the article to a miniquest article, but someone who knows how or has the administrative power to do so should change it.

Administrative power doesn't affect what you can do on this wiki. JalYt-Xil-Vimescarrot 07:48, 5 March 2008 (UTC)

thanks for moving this page without copying my question across, how inconsiderate, i waited half a day for a reply now no one has seen it thanks for wasting my time guys.

this what I wanted to know about"Follow him into the shortcut to the chaos altar, then go to the room west in the chaos tunnel and enter the portal that leads to the chaos tunnels inside. Note that there are footsteps leading up to the portal. When traversing the chaos tunnels, make sure to enter any portals with the same footsteps. Not all rooms have portals with footsteps. Every second portal with footsteps will lead to a cut scene." so does this mean to go through to the wilderness from the haos altar portal? cos there are no footsteps there, i went round and round the wildy tunnels looking for footstepped portals and found none, (i went thru to wildy from chaos altar) be more specific!

IF you are at the chaos altar, where you can runecraft chaos runes, then you are at the wrong place. Its the chaos tunnels where you go through to fight all those enemies. You can find several entrances to them in the low levels of wilderness.

And i know for certain that there are two cutscenes you have to go through before you try fighting him. One is at fire giants, you will see him kill two of them in one hit. The other is in a room filled with undead, he will summon 2 dire wolfs to attack you. Once you come across both of those in order, then go to the room with daggnoths and go through the westernmost-portal.--Pkthis 14:02, 6 March 2008 (UTC)

Thanks for that but I used another guide and also realised there was another portal in the tunnels beneath the statue and have since killed bork twice.

I got a pic[edit source]

I got a picture of Surok hitting the fire giants but it doesnt seem to "Insert Image" at all. It is a PNG. --

Ok, I went through the miniquest (using another guide) and got to the boss fight with Bork. However, once I got there, I was unable to fight him. I BARELY escaped with my life (2 HP). I couldn't tele out...why? Because all my stats were lowered. 9/83 Attack, 9/83 Strength, 9/79 Magic. Somewhere in those tunnels on my way to Bork, something greatly reduced my stats. I did not notice until I was in mid-fight with Bork and hitting constant 0's. Might want to mention the location of the exit portal. I was running scared, trying to eat (ran out of food) and barely escaped in time. To be honest, I'm not sure exactly where the exit is (because I had my camera down and was looking for a way out). Also mention to bring a Stat Restore Potion with you.

ASIDE: I have a good pic of Surok leveling the Fire Giants. If you want it, let me know. Also, does anyone know if I have to go all the way through the tunnels again (following footsteps) to get to Bork again (since I DID NOT kill him the first time)? Or can I just use the shortest path to him? 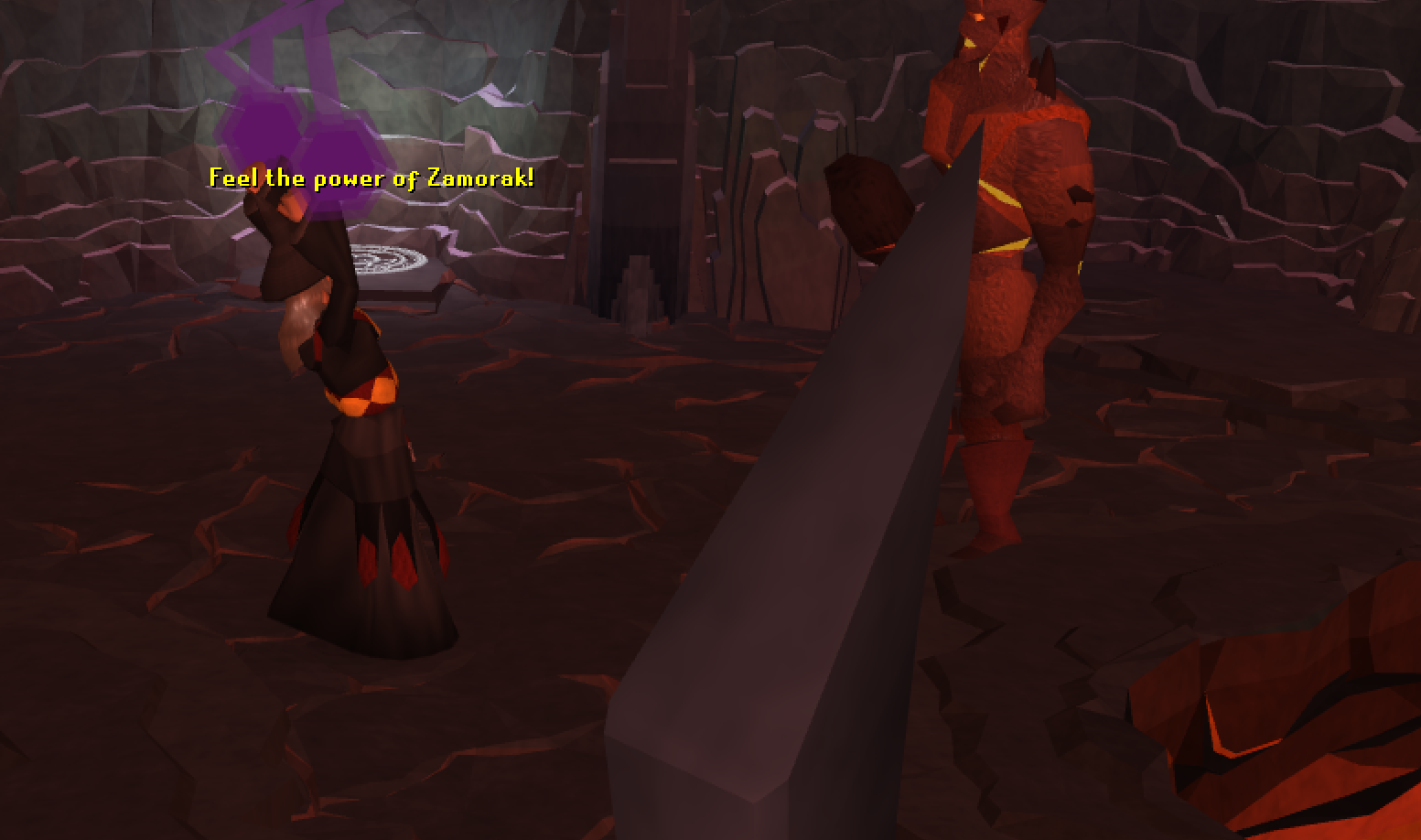 I couldn't figure out where to place this in the article and if it was really appropriate for the article. ~kytti khat 22:29, 7 March 2008 (UTC)

Nope. Yours is better Kytti Khat. UPDATES: First off, NO you do NOT have to go through the whole portal sequence to get to Surok if you have to flee the fight the first time through. You can just go back down to the Dags and into the portal. It was the Dust Devils who destroyed my combat stats. I still have no idea why they attacked me. I never clicked on them. Lastly the exit from the chamber of Bork is to the South-East. Ixindor.

How ur stats got reduced[edit source]

Im not entirely sure, but i think your magic protection bonus was too low, and the mages hit the hell out of you, most of their spells (purple and red) reduce ur stats and the green ones (earth blast?) hit you for damage, when you get far away by running they follow you with reducing spells, and use earth blasts? within a shorter range for some reason.

I would say that it's very likely it was the dust devils. The same thing happened to me. I keep forgetting to put on the face mask, and I was unlucky to be hit by one. I had to abort that attempt on Bork (using tele tablet to escape) because I just was not hitting (att, def, str, magic, etc, all 0). Now I take a restore/super-restore potion just in case. Amaurice talk 15:47, 10 March 2008 (UTC)

probably was come to think of it, but why weren't they attacking me then? (106 cb)

I wait there to gain run energy, for up to 4 mins sometimes (very heavy), they never bother to touch me, why is that?

Interesting. Maybe I will stop there next time to see what happens. I usually stop in the room before. Amaurice talk 10:57, 11 March 2008 (UTC)

When I tried waiting there, I did not get attacked. So I assume I must of accidently clicked on one before. Amaurice talk 00:31, 12 March 2008 (UTC)

The dust devils never go after me, and I run through thier room all the time on way to nechs. If you don't attack you shouldn't need a face mask. Hey Bob, if your that heavey and doing alot of running, I find a dip in the energy pool (from As a First Resort quest) to be well worth the time it takes to get there. About 10 minutes limitless run. Works nice. Also great for clue scrolls.Degenret01 11:08, 11 March 2008 (UTC)

Yes, I have seen some videos from youtube for this miniquest that players will not be attacked by dust devils, probably is the way to make the miniquest more easyeasier. =S

I think Degenret's point should be added in the article, together with the fastest teleport method (digsite pendant or gnome glider). XDRAGONAITE +

Thanks for the advice degenret, but i used bull ants.

You also need a bronze pickaxe and a chaos talisman/tiara. I keep walking between ge and statue this way -.-

Other sites listed here (on talk pages) as resources:

Can this done with an Omni-tiara?[edit source]

Aggressiveness of the Monks of Zamorak[edit source]

According to the text in the article and the accompanying image, Monks of Zamorak are not supposed to be aggressive to those having a combat level greater than 91. However, mine is currently 107, and these monks are aggressive. Not sure if this was just me, or perhaps this has changed since the article was written? Polident (talk) 14:49, November 1, 2015 (UTC)