No, we should not. Sumona is a Slayer Master, and should have an article for her own. Although Sumona is revealed to be Amascut in disguise, she is an "avatar" of Amascut, and should not be confused with Amascut.

I think she is an "avatar" of a god. Based on Hindu mythology, an avatar is a representation of god in Earth. A god in human-like form.

Can someone clarify the details behind completing the special Kalphite Queen task? Just today, I tried to do it while in a coinshare clan and it didn't count. After a few kills and thinking my damage rate was too low compared to a GS user in the group, they decided to let me solo it, tanking damage while I attack. Despite all the damage coming from me from spawn to death, the task still did not complete. This also occurred when I attempted to solo it with no "tank" (once again, all damage came from me, but a clan mate came up to watch at the very end). Only when I suggested we all leave the clan and kill it (all attacking, then them stopping at some point to let me rack up damage) did the task actually complete. It seems that you either cannot be in a clan at the time of the kill, or (more likely) have lootshare on at the time of the kill. Still fuzzy on this, so I left the page as is. On that note; I only got 30 bonus slayer points for the task. I may have read it wrong at the time though, so can someone confirm that? --Oniplayer 06:15, July 13, 2010 (UTC)

My first instinct is to say "absolutely none", though being an F2P, I have no way of figuring it out. Regardless, unless there is some proof of it, we shouldn't document it on the wiki.

Considering these edits, does Sumona in this form appear in all those quests? It has been too long since I did them, but somehow I doubt it. Her also being Amascut seems irrelevant to me, as those specific models/versions of her are not in those quests. IP83.101.44.209 (talk) 19:15, December 8, 2013 (UTC)

I have currently been stuck on the same special contract from Sumona and cannot pass it. I have killed it multiple times, making sure I do the majority of the damage and the task will not allow me to pass it. Lootshare is off and I cannot find anything else to try and fix myself. When I go to Sumona and attempt to skip the task using my slayer points, under the assignment category, it looks as if I am not currently on an assignment. I have been stuck for a month or two and would like to get back to slaying.198.153.87.139 01:29, April 20, 2015 (UTC)--Uscman88

Her location has changed as of 2015. Sumona is no longer an inhabitant of Pollnivneach. 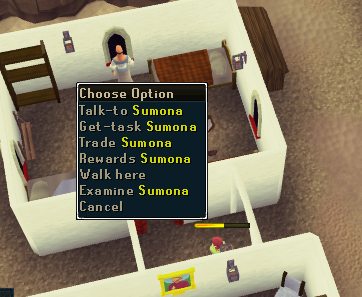 According to my image, she is no longer there. I don't know when you took the screenshot, but it must not be recent.

Since Menaphose, I noticed Sumona is missing tasks on her list. She assigns scorpions, crocodiles, desert lizards, and avianse. I do not know the weighting of these tasks and the min-max assigned amount. McGuives (talk) 18:54, September 5, 2017 (UTC)