What happened to monsters?[edit source]

A thought just occurred to me, what happened to NPCs like humans and monsters while this was happening to players? Does anyone know? Mgstec 19:57, August 2, 2010 (UTC)

As it says in the article, it was simply pinpointed to Daemonheim, though the exact cause is unknown. Do you think we should not count this article has "historical"? It is possible new information could indeed be added so I propose still leaving this article open to editing. Krayfish 20:24, April 13, 2010 (UTC)

Agreed, (which is why I added the line about the exact cause being unknown myself). Pardon speculation, but I suspect everything hasn't been revealed just yet. It seems odd to make something as dramatic as the strange power without a clear reason. Who knows whether that kind of information lies at the bottom of Daemonheim or in something else entirely, like a Nomad's-Requiem-Esque quest. Anyone else favor this article becoming un-historical? Skel X 08:04, April 17, 2010 (UTC)

To me, it's pretty obvious that we should not make this article historical. All we know is that the strange power came from Daemonheim, we have no idea what actually caused it. I doupt it will be fully revealed until Dungeoneering 2, and maybe not even then. --Mortyst 11:09, April 18, 2010 (UTC)

I just made this article non-historical. Also, I am webciting all of the forum threads in case they get eaten by the page 51 monster. Krayfish 12:55, April 18, 2010 (UTC)

I heard Zaros was the final boss in the Dungeoneering skill. I doubt that's true though.

"It is revealed through his notes that he seeks some unknown power which he simply calls, "The Rift.""

This appeared in the article on Bilrach, the Mahjarrat who created the Dungeons of Daemonhiem. It's in the "Role in Dungeoneering" section, at the end of the first paragraph. Anybody besides me think this sounds like something that could cause the Strange Power? I'm surprised nobody has noticed this yet... perhaps it'll be revealed in the next update to Dungeoneering, when we can get to the bottom level.

It's a J-Mod stating that you'll find out about the Strange Power with level 120 Dungeoneering. I found it on this page, actually...

The Rift? Like the one east of Varock maybe?

He's probably released Zamorak (Bilrach) and this is reinforced by the fact that around a 164 years ago he said he was getting closer to the rift.

They say that we'll be seeing it alot more at level 120 dungeoneering.. just a thought, maybe it was a sneak peek at the true skill mastery emote?

I hope the reason strange power is related to 120 dungeoneering isnt just the emote, that wouldn't very ironic :p

The animation/emote used for the Strange Power is the same animation that happens at the Fist of Guthix when the energy collected with the stone damages you. It's quite obvious that by now, Bilrach has reached "the Rift" already. The portal notes detail that the writer saw the castle of Daemonheim in it's former glory before it changed to an image of what it is today. He/she found the parchment that quotes the God Letters, which apparently came through the portal. A strange token that resembles a Fist of Guthix token was found as the miscellaneous note #20.

Isn't it obvious? The portal was some sort of time-traveling vortex which, for some reason, sent through a writing regarding Guthix's slumber which lasted until the end of the God Wars before he ended them by force and went to sleep again. Bilrach must have reached this portal, which must be the Rift he was looking for, and the portal must have shown the moment Guthix created the Fist of Guthix cave by accident after ending the God Wars, so the portal must have let through a wave of energy that resembles the same energies that come from the Fist (thus the Strange Power that hit everyone last year) and a Fist of Guthix token came through by accident as well.

Even further, at some point the Stone of Jas must have been kept inside Daemonheim, and it's particular magicks must have torn a rift in the space-time fabric, creating a portal that allows for time-traveling, which is why the writer of the parchment could see Daemonheim as it looked in it's prime. Since the portal was created by the power of the Stone of Jas, it would be no surprise that the portal showed the Fist of Guthix cave where the Stone was kept at one time as well, which would explain the token and the Strange Power's resemblance to the Fist of Guthix.

However, Bilrach would not have known this was the power of the Rift, so the Smuggler and the corpse Marmaros and Thok found at the bottom still make no sense, even less what's happened to Bilrach (supposing he's not the corpse) and what "the one destined to reach the true bottom of Daemonheim" is supposed to do if and when he/she reaches the actual bottom...

Nice theory. It makes sense. However, it might turn out to be true or absolutely not later on. We can't know. However, it does not exactly look like players being hurt by the fist of guthix energy, it just looks similar. Kwekko 10:11, May 6, 2011 (UTC) 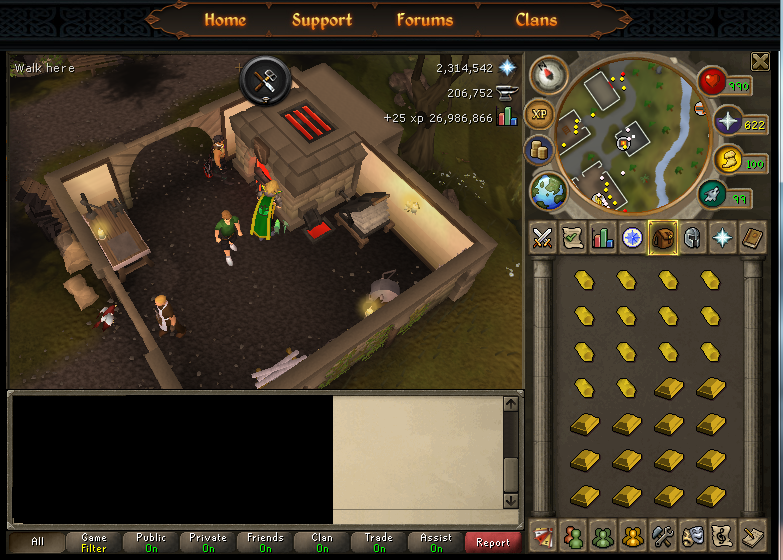 Looks like a Leech Ranged that happened when somebody died in the wilderness and activated late (it happens). The angle looks right.

One of the options:

Floor 61 is the floor that would theoretically require 120 dung, yes. However, 120 dung makes a pretty terrible quest requirement as very very few people would be able to do it, and questers would rage. That's why. User_talk:Fswe1 Fswe1

Floor 61 would be 121 Dungeoneering. New floors on odd levels only.

There was previously a citation to back up the claim of the exact timing of the event. The image is gone, but I created a backup on Imgur if anyone would still like it to verify the time. I don't think it's necessary anymore though. ɳex undique 04:56, December 31, 2016 (UTC)