Aaaaaaand the instant I post this, I check the front page and BAM! -_-

I'm just wondering, do we use this page only for the 7 signature heroes or do we include all previous signature heroes - such as Zanik, the Wise Old Man, Cyrisus, My Arm etc? It does mention in the blog about the first 3.Ciphrius Kane 13:25, June 30, 2010 (UTC)

The picture to the right may be Ariane, Ozan and Sir Ewain in the centre, as they look alike the artwork for each. So, are the two at the back none other than Linza and Raptor???

I figured to post this and see any reactions be it positive or negative.

If the left one really is Raptor, we know what his face probably looks like?

i was just looking around the other day and i have found the some of the signature heroes on the balcony at the heroes guild, i have checked both this article and that of the heroes guild itself and i was not able to find any report of this, maybe someone can place it? 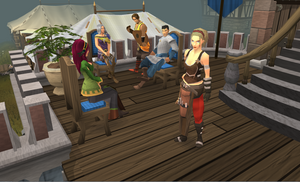 Highly doubt it. Not least since their creator has left Jagex, and the current ones are only in the second stage of character development really. User_talk:Fswe1 Fswe1

Maybe if they killed off enough... but I doubt it, they're already rarely used, adding more now would only take away to their (individual) appearance. . . . Yours,