To play the older (and better before fatigue) version of RuneScape, go to http://www.runescape.com/ and scroll down to the very bottom. Bottom right hand corner and 'click'.

This article, especially at the bottom "There were others but they escape me at the moment" is not in the tone of an encyclopedia article. I'll try to fix it in a few but am quite busy right now. geekygator 21:14, 10 November 2006 (UTC)

I'd say it's still pretty stubby. The information is incomplete, there are no pictures.... Think there should be a lot more done before the stub is removed. --Avian Maid 02:38, 11 November 2006 (UTC)

:O I need pictures of every weapon/amour in Rune so I can purple-ize them to allow people to see what the original purple rune was like! {{Signatures/Total Rune}}17:58, 15 April 2007 (UTC)

A while before Jagex made RSC members only my next door neighbour was RSC dating this girl who's brother made the autoer that screwed over RSC. She gave him a couple Halloween masks, because her bro charged RS items for the autoer. He later sold them for 4mil each and bought me and him 2 sets of rune each. The next day....they made RSC members only. Exactly 6 months later I finally became a member and tried to log in, only to find out about the 6 month rule. I MSG'd Jagex asking them to allow me access and they wouldn't listen to me :( {{Signatures/Total Rune}}17:58, 15 April 2007 (UTC)

It appears RSC got an update sometime today, as i am writing this. There was a sticky on the RSC fourms about a "reboot" of the servers. Maybe someone could check it out and add more info to it if nessacary? They said on the sticky they had to fix the friends list because it kept disappearing for some reason.--Pkthis 23:24, 1 November 2007 (UTC)

What makes you tihnk it's anything other than what they said? JalYt-Xil-Vimescarrot 23:31, 1 November 2007 (UTC)

The graphics on RuneScape classic are different to the RuneScape 2 that we have now. Its like a drawing that a beginner drew. The houses were like they were coloured by a program on the computer. Thats a example of the graphics. Thats the end of the graphics paragraph, update it if you have some infomation because I haven't even played on RuneScape Classic, but i've watched videos and seen pictures. --81.104.241.23 23:00, 21 February 2008 (UTC)Peterlinux81.104.241.23 23:00, 21 February 2008 (UTC)--

"When runescape classic first began, it only had Iron Steel Mithril Adamantite." When it was first released RS1 had mithril as the highest armour. Adamanite wasn't realesed till a few months in, Runite even later.  —The preceding unsigned comment was added by 216.114.111.136 (talk) on 17:35, 20 June 2008 (UTC).

Should it be noted that every monster in RSC had a Talk-to option?

Also, since only one player could talk to an NPC at any given time, using the bank in crowded trading areas was very tricky and was very time consuming.

This is why there are several copies of some NPCs so that when people were doing quests they did not have to wait. --

"It has been said that when someone says something offensive, it would be filtered to say 'Cabbage'. Many people are ranting in the Official Forums to bring this back, and almost every person is supporting their ideas." This is an obvious one-sided staement. For one while it may have once been filtered like that, for some time Classic has been filtered with *'s instead of cabbages. I looked at the rants forum and found nothing of this kind or on the suggestions forum on the first few pages. I found few people even mentioning cabbage on old archive forums. 65.87.45.79 03:16, 3 August 2008 (UTC)

Agreed, I have an active Classic account (I don't play on it, or even have any levels; I just keep it active) and I have not seen 'cabbage' as a filter for a long time; or on the forums for that matter. I even went to an empty area and began cursing in attempt to find a cabbage. Anyways, the statement should be removed. E.T. Prod U 16:30, 4 August 2008 (UTC)

The cabbage filter was faily short lived. Andrew wrnt though several incarnations of filters before settling on the ancestor of what we have now. One of the word filters was one which was a whitelist and anything you said which was not on the whitelist was changed to a similar word. Of course 99% of usernames are not real words so it very quickly became a complete mess lol. --

Expanding on what mercifull said, initialy, there was absolutely no filter. Later, for a short while jagex implemented 'quick chat' in a very poor manner where the server would harshly filter anything said, and very often mangle things very severely to the point of incomprehension. Sentences like "wat minin lvl r u djman23" would be substitued only by 'approved' words, or similar, the result being "Hello box fishing tuna dance" or something equally bizzare.  —The preceding unsigned comment was added by 80.3.254.238 (talk) on 06:26, 18 March 2009 (UTC).

The original server status showed ever player online, the amount of time they currently were on and the total time logged in. Here is a screenshot dating from Mar 2, 2001. During this period the only way to find out the 25 top players was through the newsletter. http://koti.mbnet.fi/hohtava/vanhoi/030201.jpg

This was changed toward the end of March 2001 to a new look that included the top players in each skill and the number of players currently logged in on to a specific server.

After the server status was elimitated JageX implemented the top 2000 for each skill. This was the 1st hiscore table available in Runescape.

Following the top 2000 list the now searchable hiscore was implemented and is pictured below. This has been expanded and updated numerous times since its implementation.

"20) Roasted Duck7 asks:
Mod MMG, in the RuneScape Classic Q&A session you mentioned
making RuneScape Classic servers in which all players would receive the
cheat codes, as to stop any cheating in the game. This sounds like
an absolutely terrific idea, but so far, all I have seen for it was
the Q&A. If you are still considering creating these servers, or if
they are already in the works, could you give us a time you expect
them to be released?

This is currently in development. It has taken a long time, since we
had to get all our old code compatible with our latest code libraries
and back-office systems. There is still a lot of work to do - probably
a few more months - but, rest assured, we are working hard on this. I
think it will be very popular when it does finally come out, as we are
packing in a bit of a surprise at the same time."  —The preceding unsigned comment was added by Fireeater93 (talk) on 09:00, 8 September 2009 (UTC).

I recently regained membership after having been away from the game for about 9 months. I was still able to log into my RSC account, to my surprise. Hopefully this will clear up the general misconceptions about the "6-month" rule!  —The preceding unsigned comment was added by 24.127.20.112 (talk) on 03:30, 17 September 2009 (UTC).

I recently regained membership after having been away from the game for about 9 months. I was still able to log into my RSC account, to my surprise. Hopefully this will clear up the general misconceptions about the "6-month" rule! 24.127.20.112 03:31, September 17, 2009 (UTC)

I noticed some wrong information about the classes you could choose from, according to some clansites out of 2001, I replaced good information. This is the site. --Zorak plorak 13:15, October 15, 2009 (UTC)

Thanks for your contribution. The early 2001 classes that you listed are slightly different from the classes that I remember from 2002, largely because the modern Magic skill replaced the previous GoodMagic/BadMagic system in that timeframe. I have updated the article to clarify this. Dtm142 03:20, October 16, 2009 (UTC)

Guys, Runescape classic is open again to all members for 2 weeks!!! Better start editing. Though it does say that will remain open to you if you have entered it within those 2 weeks :).--

I rather stay on Rs2 due to its better

At least they let a server for veteran players. I don't know, both Classic and Regular are fun. So, does anyone else besides me have the veteran status? ~MuzTalk 19:46, November 11, 2009 (UTC)

Is a new wikia needed?[edit source]

Now that we are able to so vastly investigate the game, do we need to create a whole new wikia for it? Or is it too similar to Runescape to even care? --

Does it seem right that there is a separate wiki for Runescape classic. I mean isn't Runescape just a place aka Gielnor. Or if you want to think that it is the actual game, then isn't the classic just an older version of it. It is like having a separate wiki for the halo universe and halo 2 (which has literally 2 pages on it). If there was a way that we could combine the two wikis and just have the category (classic) on the end of all of the Runescape classic pages, we should do that.

I would say that we need to add classic guides to the quest pages, since now many players are able to play classic once more. =D I would love to hear your thoughts on this, and how to make past certain areas like white wolf mountain(extremely hard to do) - XXstaticXX 02:49, 12 November 2009 (UTC)

Today, I inputted a huge table to list all of the spells and details in RSC (took me like 30 minutes to figure out how to change the format...zzz), and I inputted the much sought-after formula.

I got all of my sources over at the RuneTip Classic section, and some (specifically, the formula), from our very own Trivia/Skills|article itself!

If the table seems like it might sort of be copy-right infringement, let me know (a user helped me add a ref to it just in case).

Question to the article[edit source]

Should everything underneath the first paragraph of the article be transcribed unto a new section called History? Did it already, just in case. Fruit.Smoothie 01:29, December 7, 2009 (UTC)

If the only way to train prayer was buy burying Bones, Bat bones, Big bones, and Dragon bones how were PrayGood and PrayEvil trained? It says the skill was divided into these two parts, but gives no other information. The screen shot shows PrayGood and PrayEvil at different levels, so I assume they were trained different ways? Did you have to set to Saradomin or Zamorak when praying or what? Was PrayGood from burying bones you find on the ground or get in a trade and PrayEvil from stuff you kill? This just raised my interest is all. If anyone has anymore info on it add it to the wikia. I didn't play RuneScape until RuneScape 2 had been out for awhile. Xhanort7 20:52, November 2, 2010 (UTC)

In the trivia it states:

"Eventually Jagex dishounorably tricked players by offering a reward to whoever could tell them how the bug worked[source needed], with multiple players coming forward and explaining it to them, who were then banned. This allowed for Jagex to disable the glitch."

although i mainly agree with this statement, i think we should take out the bolded word.

Uploaded a picture of Examining the Gate in Barbarian Village Pre-Kingdom of Asgarnia from early days RSC. I hope someone can find good use of it somewhere in this article as it is quite the memorabilia.

Only a handful of people were playing before Asgarnia was added. Disagree with above statement. Eric von Ayr (talk) 23:32, June 25, 2013 (UTC) 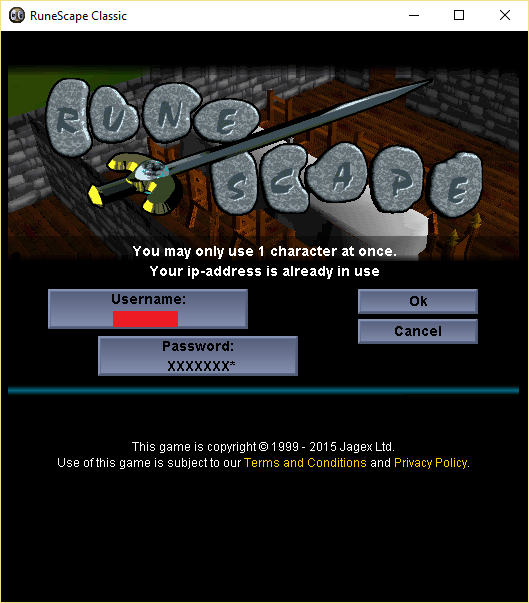 What happens if you try to login to RSC on 2 different accounts on 1 IP. Apparently the random.dat trick doesn't work. Name blocked because I don't want people seeing my email login. :P --Jlun2 (talk) 06:54, February 12, 2016 (UTC)