From the RuneScape Wiki, the wiki for all things RuneScape
< Talk:Player-owned port
Jump to: navigation, search

However, the adversity for their other missions (resources, trade goods, xp, or scrolls) seems to be set by the highest area you have unlocked, regardless of the your port management settings. For example, I just changed my port management settings to focus on the Skull and rerolled my adventurers. I got the Whaler and the Biologist (so you can get multiple adventurers with a single reroll, by the way), and their joint resource voyage was to the Scythe, the highest level I have unlocked.

Of course, voyages do not always go to the target area set in port management, so it's possible this is a fluke. I'm curious, has anyone seen a non-story mission that doesn't have the highest unlocked area as its destination? I'll set my port management settings to a different area before reset and see what happens. Shogo Yahagi (talk) 20:21, December 30, 2012 (UTC)

I switched my port management focus to the Hook before reset and again received special voyages for the Scythe. It's only two days, but it suggests that I was correct in assuming that you cannot reduce the adversity level of your special voyages through manipulation of your port management settings. Shogo Yahagi (talk) 17:27, December 31, 2012 (UTC)

I'll repeat my observation that the difficulty rating for any given voyage appears to be related to the individual's ability to complete the voyage, and is not a global difficulty rating that is the same for all players. Therefore, the difficulty column should be removed. Shogo Yahagi (talk) 17:24, December 31, 2012 (UTC)

Special Voyages/Story Missions - Captain's Log lists number of Story Missions completed, which is helpful, but it doesn't list specifically which Story Missions were completed. Speaking to Adventurers while they are in port does give the option to review previously completed missions, but is limited to a choice of 4. Is there another way to determine which missions have been completed? If so, please add it to this section of POP. I would like to prioritize Icon Hotspots and Region Focus to complete those which I have not. Apparently, I've only completed 24 Story Missions; but I am 1% away from unlocking The Bowl region, and I believe I should have unlocked more by now. Alloys (talk) 18:58, January 10, 2013 (UTC)Alloys

Thoughts on these revisions?  I know I haven't done all (or any, for that matter) of the Pincer storyline voyages even though they are all available to me, but this change is news to me.  Regardless, the addition does not make sense to me and is not formatted well.  Also, there is some comment about unlocking Oxhead and Horeseface, which is a standard voyage.  Wanted to get some feedback before I removed anything that may actually be valid.

I've gotten a voyage not on the list, for further joint missions. Screenshot is here.

Just in case anyone finds it interesting enough to note it on the page, somehow; it would seem that some Joint Voyages can be split, rather than lost, when sending off either Adventurer on another voyage. Today I had a joint voyage with the Assassin and Convict, for 10 Lacquer, as well as a Scroll mission for the Assassin. I sent my Assassin off on the scroll mission, and instead of disappearing completely, the Lacquer mission had chanced into a 5 Lacquer mission with only the Convict. 134.58.179.35 07:18, March 13, 2013 (UTC)

After today's observation, a more accurate observation seems to be that an adventurer who only as a joint mission, while the other adventurer is sent off on a voyage alone, has his/her special voyages regenerated? A joint 10 Lacquer voyage of the Assassin and Convict today, with the Assassin sent on a scroll mission (been lucky the last few days \o/ ), had the Convict suddenly give me 2 voyages: a 700 steel resource voyage and a 25k experience voyage. 83.101.44.209 05:18, March 15, 2013 (UTC)

I sent off a Scroll mission this morning, aiming to get my last Sea singer's robe bottom scroll piece. After sending off that voyage, I changed my goal to the Death lotus hood. I welcomed my ship back this evening, and received a Death lotus hood scroll piece. I was under the impression (or remember reading on the wiki at some point) that the scroll given would be set in stone once the ship was sent off? Not sure where it (or if it still) says this, but it should be changed. 83.101.44.209 19:04, April 19, 2013 (UTC)

The Page says that resource voyages for the chef are named "Can I Eat This?" However I just did a mission called "Blast it with the powder, BANG!" that gave me chimes and gunpowder. Are there mutliple names for resource voyages or did I miss something (I am new to ports).

Here is the mission info

Mission Name: Blast it with the powder, BANG!

It's possible that they created new resource adventurer missions with various titles and descriptions this time around; or perhaps they always were, but nobody ever noticed. We'll have to change the table format a bit though... IP83.101.44.209 (talk) 05:02, January 11, 2014 (UTC)

Go Among the Heathens http://imgur.com/5oQoipX

Fortune of the Sea[edit source]

Since I'm not sure how to properly format it;

From The Memory: 20480 Morale and Combat, 0 seafaring. The Shield region. Reward: 8 plates.

So I had the Whaler and sent him to Waiko as someone put down before, and it was not his correct island. Either whoever put it there is wrong/trolling, or it's a different island for every player.

I had the clue voyage for the trapper Sulphurous Silliness. Speaking to him in the bar I got the information "Reginald is currently searching The Skull for the best source of sulpher" The list of islands for him to search was as follows:

Redirected him to go to Thalassia and his voyage was a success.  Vlad the old (talk) 05:40, February 3, 2015 (UTC)rently searching The Skull for the best source of

On a related topic - the intro text implies that clue voyages (like other adventurer voyages) will be voyages to your current region.  But I was in Loop and getting Arc voyages for the Chef (2 now, both suceeded, neither was right).  Anyone else want to confirm that you can get clue voyages for *any* region not just current?  Spooky Xero (talk) 08:39, February 6, 2015 (UTC)r) will be voyages to your current regionently

This voyage was listed as 14,250 * 3 in Bowl, which seems ridiculous and sticks out like a sore thumb from the other voyages (much harder).  I received 3rd clue voyage of 5,800 * 3 @ 6:57 which I have entered in addition.  The wrong-looking Memory clue is the same as the the 3rd Exile clue voyage so would guess someone has simply mistranscribed their notes.  Someone else may wish to delete the other voyage if they have evidence that they also got 5,800 *3 Spooky Xero (talk) 10:07, February 26, 2015 (UTC)

Except for the lead up clue voyages, and the story voyages, the voyages offered by adventurers depend on the last region the player has unlocked, regardless of their current region focus. I was focussing on The Bowl today, and ended up with a The Bowl-length (6h57) Ration pack voyage from The Chef (and a normal Azure resource voyage). Has anyone else had a similar experience? IP83.101.44.209 (talk) 03:16, April 12, 2015 (UTC)

Evidence that scrolls only appear at skull and later[edit source]

There seems to be no references to what actual rewards come from clue voyages. there is a map table symbol, which i guess means clue progress, but i have been searching the wiki for the last hour, and i can find nothing.  the clue rewards page might have been deleted, but not integrated into any other page i guess.

See The Chef's clue voyage section: first you pass through 3 clue voyages (compare this to their story voyages, a set number of voyages in order to complete), and a new island unlocks. Next time you get their 'final' clue voyage, which brings with it a reward; for example Ration packs for The Chef. IP83.101.44.209 (talk) 03:55, April 17, 2015 (UTC)

The rewards section says that the ration pack/bottled cries/etc voyages "bypass the cap of 3" Does that mean that if you already have 3, you'll have up to 6 after? If so, can you still only stack up to 3? And can you keep gathering them, or would it then cap out at 6? Jimwormmaster (talk) 12:00, August 12, 2015 (UTC)

Does the map table increase the chance of getting a special voyage after the clue voyages from each adventurer are completed, or is it only of use in completing the clues?

Adventurer in port, yet NO special voyages[edit source]

Situation: Chef in port today, I can even see him in bar. However when I look into list of special voyages, there is NO special voyages that I can choose to set sail.

Is that possible? Anyone else encounters this? 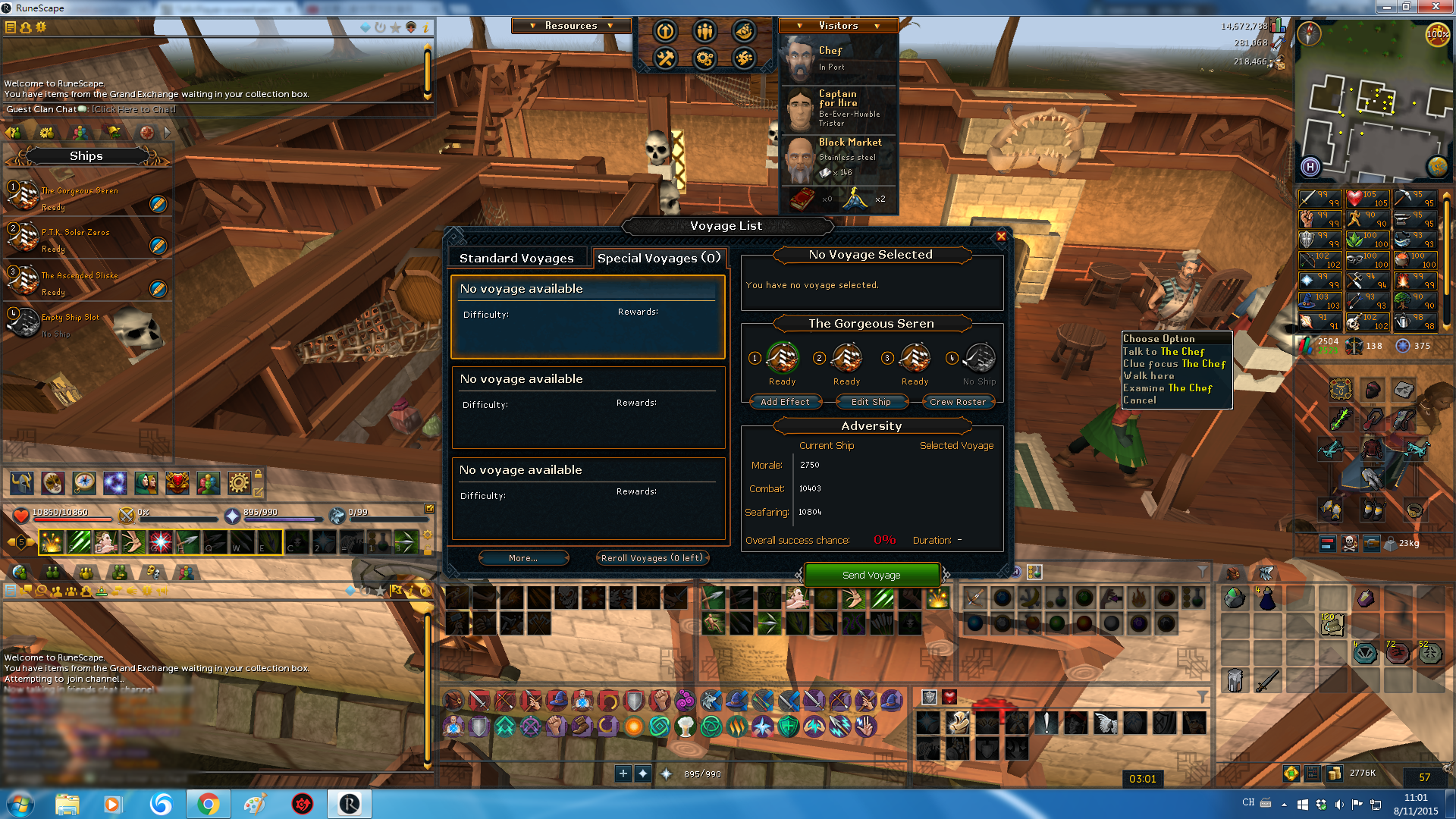 The image above is for your reference. Thanks.

Click on the link above if you cannot see the full image, sorry for inconvenience.

If no, time to report a bug LOL

When you complete an XP voyage is it done and over with, or can you be presented with the same voyage again to earn more XP? I haven't paid enough attention to XP voyages to tell if I've been given one I've already completed before or not, and I can't find an answer anywhere, so I'm hoping someone here knows otherwise I'll just have to figure it out on my own. In case that's confusing, I'm wondering if XP voyages are repeatable after success for further XP rewards or if they disappear like story missions when they've been successfully completed.