Please link to either Lost City Quest or Zanaris, not this article!

I think the Lost City Quest guide should go here, since 'Lost City' is the name of the quest. A link to Zanaris and small explanation would be put at the top of the page to serve as disambiguation. --X1011 14:33, 16 May 2006 (UTC)

What I've done already seems ok to me, we can find any links to disambiguation page using Special:Disambiguations. Was actually thinking about doing this for Karamja too. --Eucarya

What do you reccomend as lowest cb lvl for a dds pure to try this quest?

Well, you cant use weapons like a dds on the island, but i completed this quest around level 40. Just mage it behind those mushrooms.

This dude is evil

number of casts to take at level 30 magic?[edit source]

Prayer reduced to one point?[edit source]

I was down there today and mine was only reduced to 3 points... i'm lvl 46 prayer - is it some sort of percentage?

Its not a bad place to kill greater demons either... they are suceptable to magic, there are easy safespots and you can make a dramen staff which will allow you to autocast. Armcie 21:12, 10 August 2008 (UTC)

I am trying to finish the quest but the zombie just doesn't drop the axe. I know it will, but I'm too lazy to kill that many of them for one. Oh well, maybe when I'm bored I'll finish it.

Hardest part of the quest.[edit source]

I would say if you did not have this guide or any guide, convincing would be harder. However, I would also say, fighting her would be harder if you did not have 25+ magic or 30+ ranged and fletching to fight with. The safespot makes it much easier. It took me at level 42 (leveled to 43 while fighting) ranged level, about 2 minutes to kill her from behind the safespot while using an oak shortbow with iron arrows at accurate style. Hunter103 04:39, August 8, 2011 (UTC)

I'm planning on making a Summoning pure, but it'll be hard without spirit implings. Why is it impossible to kill the spirit with a ring of recoil? --Canifis 00:19, May 14, 2010 (UTC)

I entered the door but I ended up in draynor next to maggie instead. ;S

Are the four adventurers a reference to standard RPG parties? And if so, should we add that as trivia?

probably from skipping a step[edit source] 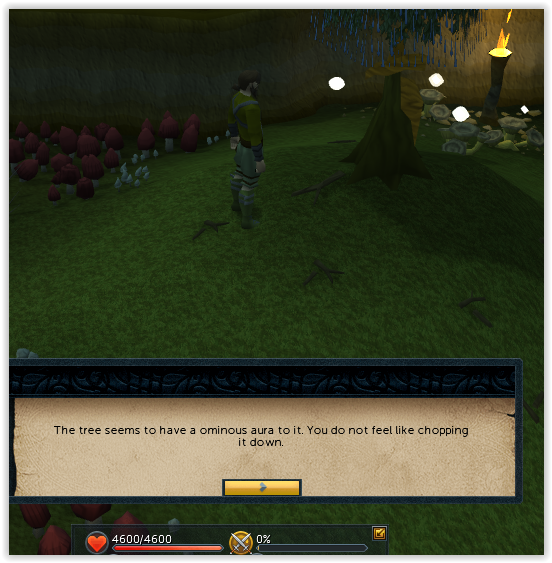 From someone on chat; decided to post it here for reference.

So...that happened in OSR, and now I can confirm its indeed for skipping a step. You don't even need to have an axe and it'll display this if you click on it: 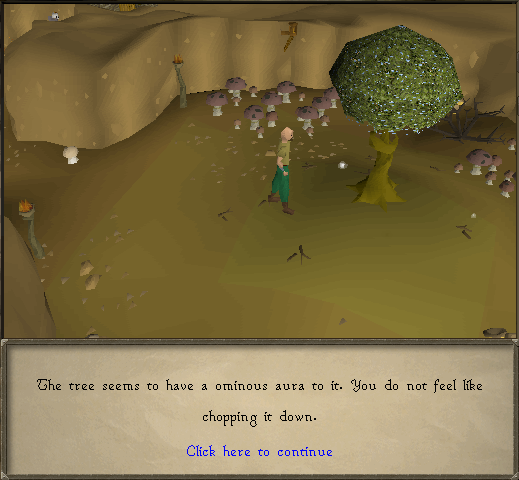