In the Menaphos Journal, its "Jenifurr".
The cat's name when found is "Jennifurr". 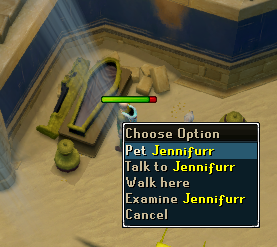 Which one is right?

I'd say the one from the NPC itself. Gotta love #InconsistencyScape :P

The Jenifurr page states, "She may rarely be found while looting sarcophagi during Pyramid plunder."

The Pyramid Plunder page, under rewards/other states, "Upon looting an urn, sarcophagus or chest, a cat named Jenifurr may spawn."

Huge difference there. Any idea which is correct?

Effectively both say there is a chance the cat may spawn, I don't exactly remember how long it took me, but I think it was kinda rare-ish as I believe that it took me a few runs.

You add a colon (:) before your reply so people see it's a reply to and if a comment is already preceded by a colon then add an additional one (the reply always having one colon more then the preceding comment). Regarding the actual question, it seems I read over those parts, I'll just make it consistent.

Hello there. Jenifurr has always been found looting sarcophagi in the Pyramid Plunder minigame. Some people have come across to me (as someone who knows Menaphos quite well) and began telling me this all of a sudden but this is not true and hasn't been so I have reverted the edit. Unless you can provide some form of proof of finding Jenifurr while looting urns, you may happily re-add it. Otherwise, please don't. As for the inconsistency in the Pyramid Plunder minigame page... I think I'm going to remove that too. Jiralite (talk) 23:18, 2 April 2019 (UTC)

I cared about the consistency, so I assumed in good faith that urns were also a possible source, so thank you for clearing that up and making it consistent.