From the RuneScape Wiki, the wiki for all things RuneScape
< Talk:Glitch
Jump to: navigation, search

The phrases "This has been fixed" or "This hasn't been fixed" are way overused in most articles containing glitches. I doubt a consensus is needed, so I will work at rewording them.

The Floating head glitch appears when you equip a soul wars cape, a face mask, and have long hair... it is simalir to the penance equipment glitch.

This happens when a dungeon has reached its limit in monsters. After it's reached monsters are invincible (they're there but you can't see them). They start attacking you but you can't attack them back even with Auto-Retaliate on. It generally happens in large rushes where you only kill the required amount of monsters, leaving the ones you don't have to kill behind.

This is a major problem for Guardian Doors as you can't kill the required monsters to move on. Also, in boss rooms, the boss doesn't appear.

This can be solved by killing other monsters in the dungeon to balance out the limit, or by logging out and then back in.

Can anyone shed any light on the recent dungeoneering glitch in which players were able to get 2x the amount of exp on a certain floor?

Also does anyone have any info on the players who were banned and why? There is a big stir on the RSForums that there were 100's of unfair bans dished out to the most elite dungeoneerers.

I was chopping ivy on the east taverly wall when a penguin walked by. turns out that i had already spied on it, but i clicked it and my character began to cut ivy sideways! what did i do?

Having problem adding to page.[edit source]

I am adding under the environment category. Someone add a section called Wrong Location Glitch. This should be the content (using [[:File:Wrong location glitch.png|this image]])

(or something like that, you know what I mean) Thanks.

Iv notest that alot of the glitch names are rong like one was calld ("Floating in ground" glitch) when im totaly shur it is called the "Pragnant" glitch.

I'v been studying glitches for quite a while now and i can give a good explination to how and why a glitch wuld work. i have even found a few glitches myself and i have even worked with a few well known glitchers like Buzzcap93, im looking to be apart of a glitch team. if anyone is interested you can pm me.

Random things went null in the adventure log (every single time you opened adventure log). as can bee seen by the photo (The Adventure Log Null Glitch)

STOP REPLACING MY PICTURE WITH YOURS YOU "FOOL" (being politically correct) MEEP 00:06, April 13, 2011 (UTC)
This appears to have happened in my adventures log as well. - -

Pregnant glitch AKA 'floating on ground', about that..[edit source]

Well now as in very top of the whole site, there is notice about NOT to add any current glitches, simply, so why's this added in, eh? And ojj, be telling ye, newbies there, the animation that stands on that filthy glitch is rarely seen because ppl rarely go that far in Rogue's Den, and get hit by the exploding floor trap, where charater slams on floor, with this animation, exactly the same.

Yup, I have pictures, latest glitch, add them to article if you feel they are significant. Also there is a no jaw glitch when equipping Bunny Ears and other helms. 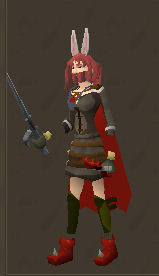 Same happens if you wear a witchdocktors mask with certain hair styles.

I'd just like to confirm that these ones in the talk page above me are not fake and if anyone wants confirmation they should ask me to post the fullscreen capture versions and I will. You can also see people's avatars on the RSOF that have this glitch on their faces. Add one of these to the article if you'd like, especially if the one that is currently there is fake.

Ok, it is obvious that the gender glitch is a fake picture, and someone keeps putting it on the page, can someone block the user that keeps adding it? Maxsomuchfun 22:11, June 10, 2011 (UTC)

No, because it's not fake.

It LOOKS fake probably because it's horribly stretched out. Why not just use this picture example from the above talk topic that shows the glitch much more clearly and all it's sub-forms. The fake that, that one looks fake stirs this kind of controversy. I suggest using this one instead since it looks "real". Thoughts?
See pic:

It's only stretched because of a Wikia upload bug. One picture is enough.

I added a picture of the seal glitch,also maybe we should add in about the glitch that happens where is says you've logged in twice ~Ĺ∑Ĝîτ~

there is a small glitch.

Happened twice to me. The other was on an english server but I didn't bother taking a screenie.

if you log out whilst youve had soemthing right clicked (ie, lag out/disconnect, 5 min timer) this will happen

Sometime between 2nd Nov 2011 and 10th Nov 2011, a glitch occured whereby you could buy anything from the Loyalty Shop without losing Loyalty Points (To a certain extent).

How It Worked - A player was able to access any loyalty shop on any members world just like normal but when it came to buying something, an error occured. The player could buy something in the Loyalty shop within his or her points range but when the player clicked 'Buy', an error message showed up informing him or her that the purchase couldnt be completed. After the player dismissed this message, the purchase that they tried to make will become 'Redeemable', and the player will be able to redeem the item that they tried to purchase free of charge. The players Loyalty points never reduced. There was only one catch. Players couldnt 'buy' anything unless they had the required amount of points.

This only worked to a certain extent though. A player must have had the required points to make the purchase in the first place. If a player only had 3500 points and tried to buy the storm emote, it would say that the player did not have enough points to make this purchase. On the other hand, the player would still be able to buy anything that was 3500 points of lower and still retain 3500 points.

THIS IS NOW FIXED!

this happens with all items. removed from bug list.

At first there was a bug where you could grant yourself permission to talk/kick in clan chat by granting that permission to anyone below your own rank. This was later fixed when they disallowed granting permissions you did not have yourself. While they did this they also created another problem. Ranks below the rank of admin can no longer be disallowed from entering the citadel/keep. Trying to do so will result in a tooltip message saying "Only admins and above may change who may enter the keep." This message of course does not make any sense since that isn't what you're trying to do. Following ppRS:GLITCH[[ I think this is a Minor bug, but RS:GLITCH also explicitly says to never edit this article. So where should it be mentioned, anyone know?

I changed this already in the article out of habit, but as I explore more pages, I'm seeing both spellings used equally throughout different articles. I'm starting to think it's supposed to be the former. Is "persistant" one of those British spelling quirks or just a typo? Eevables 08:21, May 5, 2012 (UTC)