This is called denying the antecedent. Ghostly essence is stupidly rare, so a small sample like your single task doesn't constitute proof. MolMan 01:18, October 14, 2014 (UTC)

2nd task of them , now in the slayer tower. still no ghost ess drop. but fine, lets see if someone else gets a drop of it. --

I'm nearly done with the cHaOs title, only needing a Statius helmet to drop. I've killed well over 15k Revenants. The only one I skip is the dragon. I have legit never seen a single ghostly essence. Here is my collection log for proof. 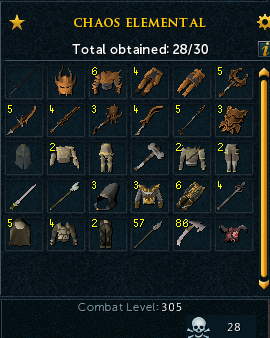 Hello Djfang! I don't know about your question, but could you upload your picture to an external host please? such as https://imgur.com. Thanks! Jr Mime (talk) 03:45, 17 January 2019 (UTC)