Um..I think there is a error with the Disadvantages:

I'm removing this for now, as I think there are none lol. Well, let's look at what was there.

How is this an advantage?

Even those intending to become members can build their levels up first, or see if it's really for them

Again, how is this an advantage?

Some people may choose to be members for a short time, after building up supplies that they can make arrows or high level runes from, and then go back to a bit of free player killing

Not to get into an editwar, but by removing advantages and "strengthing" the disadvantages, this article moves away from a neutral point of view--Curmudgeony 01:12, 13 July 2006 (UTC)

The only real advantage to not being a member is not having to pay. That is the only advantage... 06:52, 13 July 2006 (UTC)
I have to say that I don't think this article is biased at all. I believe that if membership were free, almost every nonmember would become a member. Therefore, the only advantage to not being a member is that you save money. The three items Richard removed didn't make sense as advantages, they were more like reasons that people wouldn't be members, so I believe that the article is fine in its current state. -- Couchpotato99 00:41, 2 August 2006 (UTC)

Actually, F2P do have advantages, albeit small ones, like not dying as easily. I've seen what the strong monsters can do(youtube) and the literally kill about 1-3 members in less that a minute. And those are in their 60s and 70s. In f2p, we have none of them.

Well the version from this date seems a little more balanced. The current version seems to be exceptionally negative towards any positive aspects of free to play playing. The comment from above I'm removing this [advantages] for now, as I think there are none lol. Seems to sum up the bias in the article. This wiki should be for both members and non members, and frankly a nonmember might find the tone of this article a little insulting.--Curmudgeony 00:35, 2 August 2006 (UTC)

People would think there is bias here, but there isn't. I don't mean to be rude, but yes, there ARE more disadvantages than advantages. That's the POINT. If there wasn't an insanely long list of DISADVANTAGES, no one would bother with Membership. Kang227 16:44, 25 January 2007 (UTC)

I just spent roughly four years as a non-member before becoming a member. I must say that I was not insulted in any way from this article and the fact is that there really are no advantages to the free world. The only possible one is that you will get experience slightly slower in the free world. Every time there was an update, I would know it would be for members only and I would not get to use it. My 99's went neglected without a skillcape. My freinds air-guitared me to death... I know that this post is, itself, not objective, but I would support the nuetrality of this article Mjc3 14:12, 17 October 2008 (UTC)

The biased tag was re-added to this page by an anonymous ip. The last time this was declared biased, only one editor believed so and couldn't provide any substantial evidence. Unless the anonymous editor wishes to defend his decision to add the tag or another editor wants to have the tag added, it should be removed. -- Couchpotato99 (talk) (contribs) 21:51, 8 September 2006 (UTC)

Removed, if someone wants to put it back they can justify it here. JalYt-Xil-Vimescarrot 21:56, 8 September 2006 (UTC)

But they can't use the insanely powerful super-weapons. I disagree for another reason: the crowds in the Wilderness are SO MUCH LARGER in F2P. I'll mention that... Kang227 16:41, 25 January 2007 (UTC)

How would not being able to use things like the whip in F2P make the wilderness less safe?. To me it sounds akin to saying a deactivated gun is less safe than the real thing... Marcus Gord 18:48, 25 January 2007 (UTC)

Assuming you know how to use it, a loaded gun makes you safer than an empty one. That's the whole purpose of buying a gun, unless you're a psychopath or you're military. JalYt-Xil-Vimescarrot 20:35, 25 January 2007 (UTC)

I edited it,since the wild is not longer used for open pking,something went wrong with the edit i made,i suck at editing

No skill cape for f2p, I think someone should mention that as a disadvantage (less recognition for achievement). Aurora sword http://a.imageshack.us/img191/1589/butterflyj.png 04:06, 5 May 2007 (UTC)

There are rule breaking and macroing in memebrs world also, so i don't think that's really a disadvantage over P2P Aurora sword http://a.imageshack.us/img191/1589/butterflyj.png 04:12, 5 May 2007 (UTC)

There are a lot more macroers in f2p, though.

I completely disagree with that sentance altogether. Also it can give the idea that "oh, I'll get away with scamming in F2P!".

I've gone through the article and did my best to clean up/reword areas that are possibly biased. If anyone else wants to look through the article, maybe we could remove the NPoV tag. In addition, I just did some general cleanup (grammar fixes, updated info, links, removed any abbreviations I came across, etc) Regabuh 18:19, 20 March 2008 (UTC)

About a month and no further comments on the NPoV dispute, based on the previous messages here, I think it's safe if I remove the tag. Regabuh 21:09, 10 April 2008 (UTC)

Not to disrespect the edit of how much world is available for free players vs members (edit changed 10% to 30%) but I am wondering where either of these numbers came from. Is there any notable source of info that is gauranteed? Like off the KB? --Degenret01 04:25, 22 March 2008 (UTC)

So like I said, can anyone correlate this info? I don't care about servers available, that is not the question. The question is world size, free vs pay.--Degenret01 14:05, 25 March 2008 (UTC)

I would guess that the 10% just came from a visual estimate by looking at the world map. I don't know where that number originally came from, but I don't think there's any hard numbers to back it up, if that's what you're asking.
There is the free-to-play version of the world map on the page now... I guess if someone really wanted to know, they could compare the size of that map (minus the black parts) to the official world map on the Jagex website (again, minus black spaces) and get a concrete ratio... That's the only way I could think you could get a reliable estimate, but it'd be kinda tedious. Regabuh 18:58, 25 March 2008 (UTC)
So can anyone tell me what the real ratio is including all the dungeons? I'd say its more around 5% pyrolord 08:11, April 5, 2011 (UTC)

It says there Aren't any Capes of accomplishment for free players, but there are skill capes?? Aren't they the same thing?--

Lol, did that confuse anyone else? I've removed that sentence. Thanks,

Personally I believe this should be removed. It is a stereotype. Also, it is highly opinionated, situational, and in general, not a proper writing style.

The topic I'm looking at in regards to containing opinions is the one about there being a younger player base in F2P. You can read it yourself, but this is the question I asked myself after reading it: Am I reading something on a wiki, or a forum post on the Official Runescape Fans Membership Forum? Are there any official sources, such as a Jagex poll? Besides, this topic in general is incorrect, since, in society today, kids receive an allowance for doing chores, meaning they have money. I'm removing the topic because of bias, feel free to revert if I'm wrong.Tc3001 20:01, October 27, 2010 (UTC)

In the template on the side, somewhat inbetween "Advantages" and "Overview", the number of maximum tracks is listed as 216. I can say for certain that this is incorrect, having just checked on my account. I have 219 tracks unlocked, with an unknown number left because of Dungeoneering. The total is definitely over 220, though I don't know how many exactly.98.219.170.180 17:58, July 26, 2011 (UTC)

It's outdated. Someone should submit a new picture. 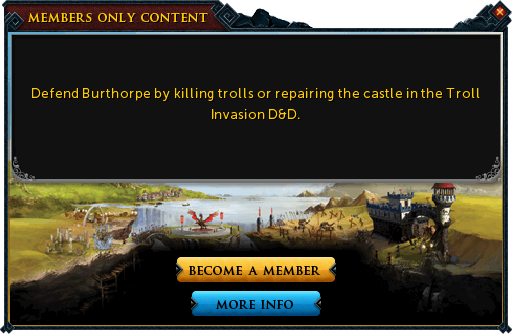 This appears when you do the following:

Oddly that doesn't appear for the following; instead it gives the message: "You need to be on a members' world to use this feature."

For the ones that don't apply at all since they don't appear to be interactable or don't exist: