From the RuneScape Wiki, the wiki for all things RuneScape
< Talk:Dungeoneering
Jump to: navigation, search

The title, "Crafting Catastrophe - Got killed by a chisel." made me rotfl.

How is that possible?

I got Crafting Calamity by making a key to open a door and dying, so I bet Crafting Catastrophe is the chisel thing.

Are calamity and catastrophe really two different titles? Calamity is not listed in Knowledge Base and without it there are exactly 50 titles. --BeyPokéDig 12:48, August 8, 2010 (UTC)

Against all odds is quite easy to get if you're fighting the Luminescent Icefiend. When he's almost dead, he'll use the icicles one last time. Let them hit you, and kill the icefiend.

Against all odds - I've killed several bosses with fewer than 10 life points remaining, but I can't seem to get this title anymore...

I definitely killed Luminescent Icefiend with less than 10 health, didn't eat, and ended dungeon without getting this title. *shrug*

Wouldn't Nothing Special have to be teams of at least 3? You'd have to have at least 3 people, otherwise, you'd automatically get either least damage, or one of the most damage titles. --Jimfromtx 16:06, July 19, 2010 (UTC)

If both players deal nearly equal amount of damage, they will possibly reach the minimum damage requirement to avoid least damage at all. Rewlf2 03:18, August 16, 2010 (UTC)

I'm sure that title "Least I ain't chicken" is based on Leeroy Jenkins. Except the line was "Least I have chicken".

(these are not the actual descriptions)

Handyman: I got this by buying at the beggining of the dungeon a hatchet, a pickaxe, a tinderbox, a hammer, a fishing rod, 50 feathers, a knife, a vial and an antipoison.

Rest in Peace: Use 10 bones on an altar.

Considering the comic WillowGuy made as a joke for the summoning skillcape emote (yes, it's not canon, but it gives me the idea), I'd wager that the "I Choose You!" title is either by doing the most damage with summons, or the most/a certain number of summons. Just a thought. --Jimfromtx 04:02, July 20, 2010 (UTC)

There are more titles explained(although some of them have the way to get them hidden) here.

Mm no, because I never open the doors yet I solve most of the puzzles. Sometimes I get the title, sometimes I don't.

"The Chief - Make food after the boss that has already been killed." This title, if gained in the manner it states, is not gainable in solo play. Discovered this on personal venture.

"Culinary Disaster - Cook lots of high level food on low level logs. Unique per raid; any size team." This title can NOT be earned in solo play. Again, discovered this personally.

"Gatherer - Gathered the most resources." Again, not obtainable in solo play.

"Glutton - Wasted the most food by over-eating" Also not attainable in solo. (I solo Dungeoneering alot, can't you tell? =P )

"M.V.P. - Solve puzzles, use non-combat skills more than anyone else." I would have to agree in that this title is not focused on things outside of combat--I think that this one may be, more or less, whoever gains the most titles (and the least bad titles) which would show that they [demonstrated that they] are the most versatile and useful in the group (hence MVP lol).

"Tele-Fail - Use the Gatestone Teleport while it is in the same room as you." Just want to comment that that's funny as hell ... I want to go try that now LOL!

"The Gate Escape - Used a Gatestone to escape a Boss on low health." I'm not sure what qualifies as 'low health'; I did this against the Hobgoblin Geomancer on floor 14 while my health was blinking red and such, and didn't earn this title. There might be more to it. (its also the only group I've gone through a dungeon with, and the only dungeon I ever died in >,<" morale: never go Dungeoneering in a group unless you're actually friends with the other members.)

I'd say low is 10lp, as that's what a lot of other titles have as their 'low point'. Just a guess.

"Untouchable - Did not take any damage but dealt damage." Just commenting that I did get this one (once) on solo play =P

I can has heim crab?[edit source]

im not sure this is a title.. i just did floor 1 complexity 6 eating nothing but 2 heim crabs and didnt die once and i didnt get this. Although if it is a title why didnt i get it?

found out the problem.. i got too many titles so i can has heim crab was kicked out for better ones.Baptiejames 01:03, October 9, 2010 (UTC)

I am just to prove that IP user gave wrong information. To get It's too easy! you need to get all three combat triangle titles at once. Anyone having enquiries can PM me and I'll perform it too. Rewlf2 18:40, September 16, 2010 (UTC)

Does anyone know the specifics behind WoopWoopWoop? I think you have like 15 seconds for each room... but:

Can you reenter rooms? If not, you need a straight path right?

Do you have to kill all monsters?

Can it be gained on any difficulty setting?

I can answer one of those questions. I didn't kill any monsters except the boss and guardian doors. I did re-enter some rooms when required (like had to get a key from somewhere else). I was doing a small dungeon but with six complexity and I solo'ed. Djpailo (talk) 16:48, July 5, 2013 (UTC)

There were doubts it was real, so here you go: 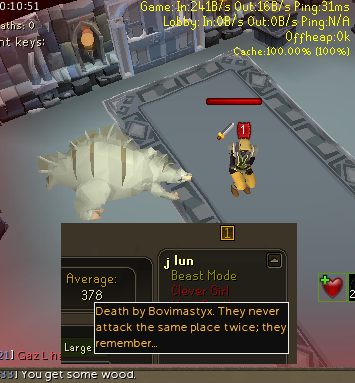