EDIT: Apparently it's just changing efficiency/luck on Enriched Memories rather than it actually improving per level. Emptylord (talk) 22:23, August 22, 2013 (UTC)

It actually improves slightly due to gaining more energy near the end of a tier (only applies to some tiers). Also, it seems that the probability of getting an enhanced memory increases with level (need some proof). As for how to express it, using a range from lowest to highest rate per tier should be sufficient. -- Code2004 (talk) 22:39, August 22, 2013 (UTC)

Hmm, I was originally thinking of something else it seems. Regardless, for example: http://services.runescape.com/m=rswiki/en/Flickering_wisp . She's the only one who edited that page, and it states: "Sometimes, around every 1000 harvests, you will get an enriched flickering memory."; quite a concrete number. IP83.101.44.209 (talk) 18:15, August 23, 2013 (UTC)

No, enriched harvests are random, I've gotten them consecutively plenty of times. Possibly influenced by your level. That 1000 number refers to chronicle fragments. It actually means 1000 ticks, i.e. once a minute. MolMan 18:17, August 23, 2013 (UTC)

This isn't very evident at lower Divination levels, but there seem to be numerous spawn areas for wisps per rift. A few wisps spawn in fixed areas, while many hop around after being depleted. This is very evident at the Rift at Sophanem. Knowing this can help improve experience rates by forcing mobile wisps to an area closer to the rift. If someone could corroborate this information, it might be worthy of noting in the article. --

If I recall correctly, at 50 Divination, I was getting twice the energy each harvest. In layman's terms, I would gain energy in increments of two. As soon as I reached 75 Divination, however, the amount would increase to three. If this is so, I wonder what level allows for four times the energy.  —The preceding unsigned comment was added by Metallicanrana (talk). 08:48, August 28, 2013 (UTC)

See Divine energy and RSWiki. Also, I've confirmed this with Mightiest and Im Choice. As for templating your sig, Ciphrius Kane gave me this really useful link. --

I edited the table to be the xp per action with boons, as this article is about efficient training. I am unsure about the xp on tier 9 memroes with memories + energies used, it is technically 48.07, however jagex does not use anything past 10ths - so it rounds down to 48 xp (friend just confirmed). There was one of the other numbers that may also round down instead of up t10-12, which i am unable to find at this time. AFKeying (talk) 11:07, August 29, 2013 (UTC)

I just did a quick test converting luminous memories for enhanced xp with a boon, which should confer 57.75 xp each. The actual average over 24 conversions was 57.708... xp each. I'm guessing that they round down to the nearest tenth (i.e., Floor[10xp]/10). This seems to tally with what your friend has found. --

How much of a discrepancy is there? Most of these numbers were just added by editors, so we haven't put the maths behind it... yet. Whether we've mathed it or not, I'd like them to be near correct in the mean time. MolMan 13:07, August 30, 2013 (UTC)

If anyone else could help getting this data correct that would be much appreciated. Do note that the required data is WITHOUT buying energy and WITHOUT chronicle fragments

Why is there no column for the "Maximum XP Rate", AKA using bought energy to speed up experience. This is certainly worthwhile, and it was there, but was deleted for some reason. Why? Is the maximum XP per hour not the most important thing about training this skill?Diivinationfools (talk) 20:26, September 6, 2013 (UTC)

Probably because Maximum XP Rates are irrelavant as no one except highly focused players are able to maintain that rate.  —The preceding unsigned comment was added by 24.38.31.114 (talk) on 15:23, November 8, 2013.

The rates are average, the odds of getting enriched vs normal memories will impact the XP of each load. (A little liek if you go fishing for trout/salmon or tuna/swordfish). Plus not everyone will buy energy. For some, the cost involved to get the extra say 5-10k/hr does not warrant the cost, so they are stuck using whatever energy they siphon, and that can take a few loads to get enough to convert 1 load to max XP.  —The preceding unsigned comment was added by 64.129.32.194 (talk) on 5:44, November 8, 2013.

This artictle seems to suggest that immediately moving on when a new tier becomes available is ideal, but with the shifting ratio of enriched memories, this is hardly so! 144.32.60.50 23:42, March 9, 2014 (UTC)

The final location is just south of the Poison Waste. There are no real efficient means of travel, but the best options are:

But doesn't specify where the teleport portal is or where it goes to.

This should be clarified in the page not just here.

Does anyone happen to know how many memories one can convert per hour by saving them up, and then running them back and forth at the rift by Mobilizing Armies (with or without a Muspah familiar? I've been saving up a ton for the bonus XP weekend this February and was wondering, so I could calculate my rates.

I've just changed this article to match up to other skill training guides. I've changed to experience rate estimates to those mentioned previously on the talk page (in the "Correcting Exp/hr" section) as these are base experience rates, except for the estimates for pale and incandescent wisps which I tested myself.

Tried using prism of dowsing at incandescent wisps with level 99 and got 30,877/20m (using bought energy and including 1 enriched spring giving 19 enriched memories) = 92,631. Have not added it to the guide because it seems to actually decreases XP rates a bit - maybe because of inventory space being taken up by runes.

Why do sections not need capitalisation to them? E.G: Levels 1-10: pale wisps

Personally, to me, that just looks dumb (Though, unless it is the British way of doing that, then it is fair). I think it's a fair bit of OCD because it really bothers me, mainly more because on other training pages, the Methods sections look like this: 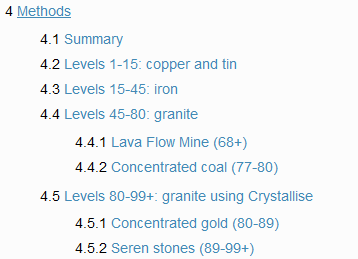 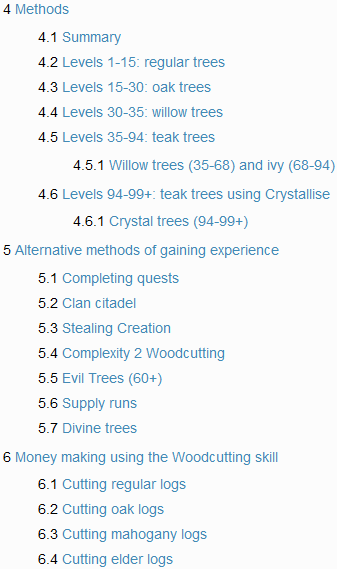 I struggle to even understand what you're referring to, but if you mean the fact that things like 'pale wisp' aren't capitalised at the start, I'd say it is down to grammar. Something like a pale wisp isn't a location, or a name of someone. It is pretty much an object. And as far as grammar (well at least British grammar) goes, capitalising the name of an object is un-necessary. For example, you wouldn't say "I would like a Banana", would you? jayden

Hey, I changed these back as per the guidelines in the style guide. Basically, this says that only words that are proper nouns, such as the place name "Lava Flow Mine", and the first word of a heading should be capitalised in headings. Hope that explains why I changed this and feel free to leave me a talk page message if you want help with anything else :)

Both this, and the Chronicle page list the rates as 1/25 for every thousang memories collected. I don't have the official numbers, but this reads like you have a 1 in 25 chance from every thousand memories collected, meaning this section either needs re-writing to clarify or a reference source, as experience has had me collecting them magnitudes faster than this (three from a single spring is currently my record, with an average of around 1 chronicle per 100 memories).

With the Arc batch 2 released, the divination training in the Arc may be worth it after level 90. Personally, I don't have the required level to do so. Would someone please kindly look into these? Thank you very much. --Alphachan (talk) 06:14, October 26, 2016 (UTC)

XP rates per hour are way off by lvl 60, i see from past discussion that xp rates per hour have been known to be off for some time and yet havent been fixed but idk why.

I just did 50-60 and averaged like 19-22k per hour not buying energy which is notably less than the stated 27k.

I just started doing 60-65 and at level 60 im averaging only 24k per hour not buying extra energy. Thats almost half of the stated 44k per hour! In both cases i made sure to get every enriched wisp that spawned while i was training too.

One thing i can definitely confirm is that higher levels get more enriched whisps. At lvl 59 i would sometimes get half an inventory enriched with gleaming but at level 60 im already like 70% to lvl 61 and have not seen a single enriched vibrant aside from harvesting from enriched springs.